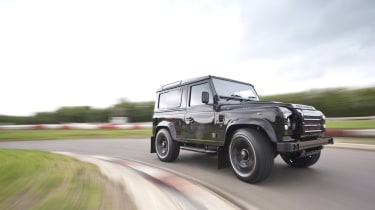 Land Rover aftermarket specialist Urban Truck has unveiled its latest modified Defender, the Ultimate Edition. Based on a Defender 90, the modified off roader has undergone a raft of visual and performance upgrades to make it one of the most heavily modified versions of the classic 4x4 money can buy.

Where other examples of Urban Truck’s work sees the Defender receive a select few additions, the Ultimate has been given the full-fat makeover, with details such as a new front grille, light surrounds, bonnet vents and black trim accompanied by beefy 18-inch alloy wheels.

Stretched over these wheels are chunky BF Goodrich 265 width tyres complete with white lettering for the ultimate rugged off roader look, plus uprated Bilstein dampers have been added to provide a better stance and ride. Mud flaps and underbody protection add to the rugged image, whilst a choice of colours are contrasted by red brake calipers, clear finish LED lights and a stainless steel bolt kit.

Inside, the Ultimate Edition features upgraded satnav, Bluetooth connectivity, a rear view camera and parking sensor kit, as well as an Alpine audio system. The standard Defender seats have been replaced by heated nappa leather Recaro items. A choice of a Momo Jet or Millennium leather steering wheel sits ahead of customised dials.

Urban Truck has also worked under the bonnet, remapping the 2.2-litre diesel engine to gain an extra 40bhp and 52lb ft of torque – resulting in 160bhp and 318lb ft maximums. The gains are yielded by a new Allisport intercooler, K&N induction filter and stainless steel exhaust system.

At £49,995, the Urban Truck Ultimate Edition costs £10,890 more than the highest spec standard Defender 90. The price compares well to rivals’ alternatives, though; this fact is emphasised when alternative customised Defenders are brought into the equation. Another British Land Rover modifier, Khan, sells its own Defender 90 for £50,000. But Yorkshire based modifier Twisted takes things a step further as it sells its own Red Edition Defenders for an eye watering £75,000.

Unsurprisingly both of these examples receive a long list of upgrades much like Urban Truck’s, but with price tags substantially higher than the standard range topping Defender’s, it would be a surprise to see anyone in wellies buying any of these 4x4s.