Nissan Gripz crossover concept: A 240Z for the modern era? 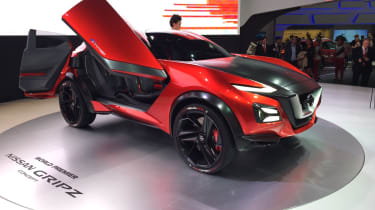 Nissan has finally revealed its Gripz crossover concept in full at the Frankfurt motor show.

Taking inspiration from the original 240Z sports car and racing bicycles, the Gripz concept hints at the look of a potential Z-car crossover – taking the sports car line in an entirely different direction.

At the same time, the Gripz also features Nissan’s latest dabbling in hybrid technology, with a petrol-electric drivetrain using components from the Nissan Leaf electric car.

At 4100mm long, 1890mm wide and 1500mm high, Gripz is slightly shorter than a Nissan Juke, but over 100mm wider and 70mm closer to the ground – accentuating the concept’s dramatic proportions.

Nissan says the idea is to mix the silhouette of a sports car with a raised ride height to take on more challenging terrain than sports cars are equipped to deal with. That said, much of the concept’s inspiration comes from the Safari rally-winning 240Z of the 1970s, which lends its red and black colour scheme and several small styling details. 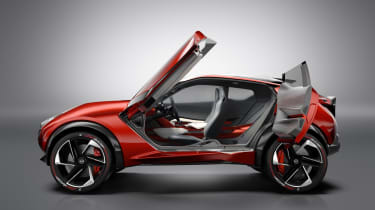 Resolutely modern, the Gripz takes inspiration from the 240Z in its coupe-like roofline and kicked-up tail. At the same time, several elements of Nissan’s Sway concept from the 2015 Geneva motor show find their way onto the car, from Nissan’s ‘V-motion’ grille, to the boomerang-shaped lights front and rear, and the floating roof.

evo spoke to Nissan creative chief Shiro Nakamura at Le Mans earlier this year, where he hinted that the new Nissan Juke would be previewed at an imminent motor show. While Gripz isn’t that car specifically, Nakamura says it’s an indication of ‘the extremes to which the compact crossover can be pushed.’

The rest of the Gripz concept’s inspiration comes from a different sport: cycling. Part of that can be found in forward-facing cameras mounted inside the boomerang headlamps that record journeys – much as cyclists have taken to using helmet cams to record their sport. 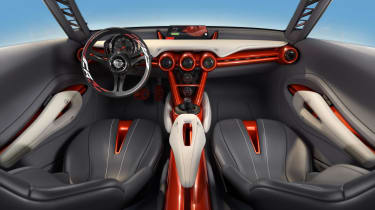 Little has been revealed about the car’s powertrain, other than its series hybrid nature. That pairs a petrol engine with an electric motor from the Nissan Leaf.

There’s no guarantee as yet the Gripz concept will lead to a 370Z replacement, nor even the next-generation Juke – but it’s evidence that Nissan is prepared to think outside the box to replace some of its most iconic models.

You can follow more launches from Frankfurt by heading over to our Frankfurt motor show hub page.