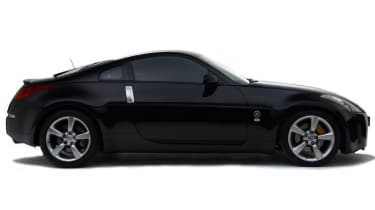 The UK market has been distorted by the significant number of ‘grey imports’. So look out for advertisements that include the terms Fairlady (the 350Z’s name in Japan), Version T, Lux or JDM (Japanese Domestic Market) – they all mean the car in question is an import. These Zeds are built to a different spec to the European models and although they are cheaper, they also command a higher insurance premium.

Regardless of the model you choose, any car you look at should have a fully completed service schedule. There are plenty of 350Zs around so ignore those that have not been properly maintained. In fact, if you find the car you’re looking at has any fault at all, just walk away. You’ll soon find a better example.

Servicing is relatively expensive for a car in this price bracket so if you have any doubts about what work has been carried out, call the dealer and double-check their records.

New Nissans come with a three-year warranty, so nearly new Zeds will have some of this left, but you shouldn’t worry too much either way, as Warranty Direct reports that there are few problems and those that are encountered are usually easily rectified.EngineThe smooth, lusty V6 not only pulls hard while sounding great, it’s dependable too. We’ve not heard of any major woes, even from owners who regularly use their cars on trackdays. Of course it always pays to keep an eye on fluid levels, but the Zed is not a heavy oil user.

On the test drive the engine should rev cleanly. If you can detect any tappety rattles leave well alone as it is probably a sign of abuse.

Gearbox/clutchThe 350Z has quite a heavy gearshift action and on cars up to 2005 the ’lever can vibrate noticeably (in fact during our 2003 Car of The Year test the Sunset Bronze car we had became known as ‘the Ginger Tingler’ for this very reason). It’s not a fault – they were left this way to avoid damping out some of the feel. You soon get used to it.

If you find any notchiness, which usually manifests itself in either fourth or sixth gear, then it’s likely that the car has been subjected to some badly executed and forceful shifts.

The clutch is reasonably robust. Around 40,000 miles appears to be the average life expectancy, but as usual it depends on use. A new clutch kit costs £250 while fitting will be another £300.

A clicking noise from the rear, usually heard when moving off or under load, is caused by wear in the driveshafts. A simple and easy fix is for them to be re-greased, for which a dealer will charge around £150. The best fix, though, is to have them replaced. It may be possible to get this done under warranty; otherwise the cost is around £550 for parts and a further £250 for labour.

Wheels/tyresIrrespective of their size or design, the Zed’s rims can easily be damaged by kerbs. Ensure the wheel alignment is spot on: wear on the inside edges of the tyres is usually the first sign that it is out.

The 350Z’s handling has been set-up for the OE (original equipment) Bridgestone S02 tyres and is very sensitive to changes to other rubber. Some brands increase understeer, others promote oversteer – it appears to depend on the stiffness of the sidewalls. Some owners have also reported that the traction and ABS systems have been upset, both activating earlier than usual.

BrakesThe brakes can squeal if not used very hard, so if you find this happening on the test drive it could be a good sign, suggesting the car hasn’t been put under too much pressure.

On the road you are unlikely to have performance issues, but some owners have complained about a ‘long pedal’ when the brakes are cold. This is just down to the size of the calipers and the characteristics of the pad material and is nothing to worry about. Don’t be tempted to try and rectify this by over-filling the reservoir as this will withdraw the caliper pistons, giving you no brakes at all until you pump the pedal.

If you use the car for trackdays you may also suffer from extended pedal travel when the brakes get hot. Get some air onto them with a cool-down lap and the feel should come back.

SuspensionLittle to concern yourself with here. If the car has spent a lot of time on track the dampers may feel a little tired, but this should be instantly noticeable on the test drive.Bodywork/interiorThe blunt nose takes a fair battering from stones and bugs and can become a little tatty over time, but the quality of the paint is pretty good and few have required a respray. Otherwise there shouldnt be any bodywork issues, so if there are any signs of filler or overspray leave well alone.

The struts on the tailgate often require adjusting at some point in their life. It’s a simple job that just requires new pads and correct spacing, but if left unadjusted the struts will eventually fail completely, so get them done sooner rather than later.

Inside, the cabin resists wear very well and the electrics are similarly robust. A few owners have reported problems with the door-glass not dropping as the door is opened, but usually this happens early in the car’s life and is sorted under warranty.

Finally, some CD players are prone to skipping and there have been cases of speakers not working properly.

Back to main Nissan 350Z page