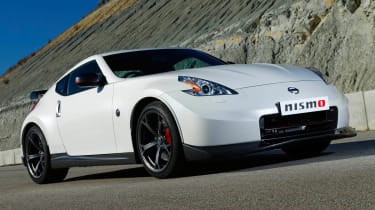 The Nissan 370Z Nismo is coming to Europe. The model has been available in Japan and the US for a number of years, but there’s now a version that’s been tuned specifically for European tastes. This 370Z follows the Juke Nismo hot hatchback as Nissan’s performance road car presence grows. Nismo claims its modifications are about enhancing driver enjoyment rather than excessive power and lap times, so the 370Z is available only as a six-speed manual coupe, while the standard car’s 3.7-litre V6 engine swells modestly in power and torque to 339bhp and 273lb ft. The 5.2sec 0-62mph time is 0.1sec quicker. Sportier suspension is 10mm lower and around 15 per cent stiffer than the standard 370Z, while stronger braking comes from Nissan GT-R-inspired tweaks, such as high performance brake fluid. A sports exhaust system is said to improve the Nismo Zed’s soundtrack. A host of aerodynamic tweaks – including those bold new front and rear ends and fixed rear spoiler – notably improve air flow and endow the 370Z Nismo with the similar high-speed downforce to the GT-R. New 19in wheels are wrapped in stickier tyres, which are wider at the rear. Visual tweaks include Nismo’s signature red pinstripes on the outside and Alcantara trim inside. There’s a pair of electrically adjustable sports seats. The Nissan 370Z Nismo goes on sale in June 2013, with prices and specifications announced closer to its launch date. With the base 370Z costing just shy of £30,000, expect to pay around £35,000.