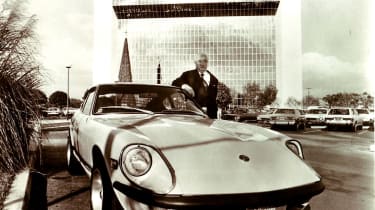 The Datsun 240Z was a significant car for many reasons, but none more so than the staggering success it achieved in the American market.

It made the Datsun brand a household name, and picked up the sports car baton dropped by the underpowered British sports cars that sold strongly in the U.S. throughout the 1950s and 1960s.

The man considered ‘father of the Datsun Z’, former Nissan Motor Corporation U.S.A. president Yutaka Katayama, passed away on February 20. He was 105.

Known throughout the industry as ‘Mr. K.’, Katayama was responsible for putting together the key concepts for the original Z-car.

The success of the car on its 1970 launch was unsurprising: It produced 151bhp and 146lb ft of torque from its twin-carb inline-six. Porsche-beating performance was on the cards at an MGB-baiting price – just $500 more than the British sports car at the time.

Katayama later retired from Nissan in 1977, and has since been inducted into the American Automotive Hall of Fame for his contribution to the American car market.

Last year, Nissan produced a series of three videos with Mr Katayama. You can watch these below – click Youtube’s ‘CC’ button to turn on English subtitles.