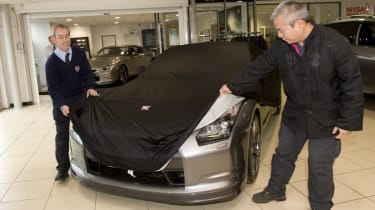 Can any car live up to the sort of hyperbole that has surrounded the R35 GT-R since its launch last year? As delivery day approached, and after months of agonising waiting, I was finally about to find out.

My good friend from the old Skyline GT-R days, Rob Gunn, offered to drive me up to St Helens in his trusty R32 GT-R. It was one of the first GT-Rs imported into the country back in 1991 by Janspeed Racing and was sold to Rob by a certain Mr Andy Middlehurst a good few years later.

Neither of us had visited Andy’s Nissan dealership, Middlehurst Motorsport, since 1997, but as we turned off the M6 and headed towards St Helens, the landmarks, particularly the towering gasometer, came flooding back from our memories.

It was a nostalgic delight to chat with Andy again. No ordinary car salesman, Andy is also four times British Saloon Car Champion and still races regularly.He is also probably best known as the only official UK supplier of both the R33 and R34 generations of Skyline GT-R.

After catching up, we then posed for photos of the handover, taking place at the symbolic time of 7:28 to commemorate the GT-R’s headline-grabbing Nordschleife lap time. Nissan’s press office had even sent their own photographer to record the event.

As the black cover was pulled back to reveal the distinctive angular shape of my very own R35 GT-R, I felt like a schoolboy finally getting the best Christmas present ever after an unbearable wait.

The Gun Metallic paint glittered under the showroom lights with a standard of paint finish superior to any of the cars I’ve owned before. The shape, in danger of becoming over-familiar due to media exposure, is fantastically engaging and imposing in the three-dimensional metal. There has never been another car sculpted quite like it.

I soon got busy applying the Auto-Journals stickers my business partner Tim Milne designed for the car (it will be doubling up as a mobile recruitment/marketing tool for our online long-term owners report site). Then, after some more photography, Gary Finney, post-sales manager, took me through a very thorough and enlightening handover session. Having personally worked on the 20-plus GT-Rs that participated in Nissan’s Race Academy events, he is now almost certainly the most knowledgeable GT-R expert in the western hemisphere! Full of amusing anecdotes, he informed me with a straight face that there were two PR departments working for the GT-R, Nissan’s and Porsche’s.

I then went through the delivery paperwork with sales manager Chris Batho, which included the small matter of swiping £53,490 through on my debit card. Finally, after bidding my farewells to Andy and his team, I gingerly edged the GT-R out of the premises and followed Nissan press photographer Danny, who had generously offered to show Chris Rutter and me some local roads that might be suitable for the action photography.

My first impressions of the car were of how wieldy it felt, despite its colossal girth (some 6ft 3in across) and of how well the dual-clutch gearbox worked as a full automatic. I had been advised to keep the revs below 3500rpm for the first 300 miles and leaving it in full auto worked perfectly for that purpose.

The second most noticeable thing was how unrelentingly firm the ride was. Even in Comfort mode (to help run-in the shocks), the ride was stiffer than an F430 in Race mode or even my hard-riding modified Corvette Z06.

Grip, even on damp roads, was as unfeasible as I remembered from my drive in the Eifel mountains last year, and the surging steam-hammer of twin- turbo torque that was already building at 3500 revs was highly promising.

Photography done, Chris and I parted company and I began the long, slow, pre-Easter slog back down to Surrey. The interior impressed with its quality, if not its aesthetics, and it certainly possesses the ultimate in traffic jam entertainment in the form of the ridiculously complicated, user-configurable multi-function display.

So, will the GT-R have enough depth of character to replace the Corvette Z06 in my affections? Will Japanese efficiency triumph over American excess?

Find out next month…