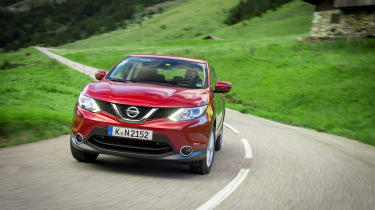 Nissan's decision to drop its slow-selling Almera and replace it with its Qashqai crossover was, for them, undoubtedly a good one. Sales success has been met with repeated efforts from rival manufacturers to match the Qashqai's new approach to the family hatchback market, but few have had a significant impact.

Predictably, as you'd expect from an SUV-lite from Nissan, it's pretty uninspiring to drive, but where the Qashqai does succeed is with excellent economy and a generous standard equipment list. As is per the case these days, the Qashqai also brings with it that high driving position that the volume market place so desires.

The Qashqai's sales success has meant Nissan has also added the slightly unusual looking Juke to its crossover family. Available in Nismo and Nismo RS forms, it's definitely an outsider's choice for those considering a hot hatch. Less so is the 540bhp GT-R engined Juke R, but you can't buy one, not unless you've got a lot of money.

Nissan is yet to apply to the GT-R treatment to the Qashqai, which means the quickest you'll get is the 1.6 DIG-T with 160bhp is it, though a 9.1 second 0-62mph time underlines everything you need to know about the Qashqai. It’s not that exciting, but then it’s very good at everything it’s meant to be good at. 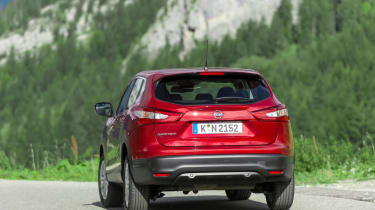 Look elsewhere and you’ll read ringing praise for the Nissan Qashqai and we’re not about to deny that for the audience it’s aimed at it’s a very competent all-rounder. That’s true of how it drives, the engines are smooth, refined, if not over-endowed with power. Economy and emissions are the numbers that matter here, not performance ones. It rides decently, even on larger alloy wheel options, while grip is decent and the handling as sure-footed as you’d expect.

There’s just not much sparkle, though that’s likely to change soon, as Nismo is said to be preparing a hotter version, borrowing the 215bhp 1.6-litre turbocharged petrol engine from the Juke Nismo RS, with chassis revisions to help the Qashqai better use it. Nismo styling will bring even more drama inside and out. That should make the school run a little bit more interesting.