Get the latest info on the championship here 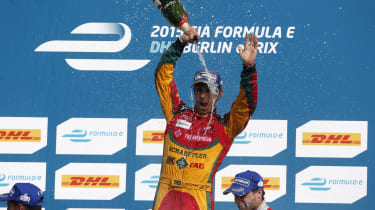 Jérôme d’Ambrosio inherited victory in round 8 of the FIA Formula E Championship, after race winner Lucas Di Grassi was stripped of the win following a technical infringement.

The race was held on a course constructed at Berlin’s former Tempelhof airport, the dusty and dirty surface and tight, twisty nature of the track providing a tough challenge for the drivers, teams and the Michelin Pilot Sport EV tyres fitted to all the cars.  With 17 corners during the 2.47km lap, and an abrasive surface due to the ageing concrete slabs, the race promised plenty of overtaking and didn’t disappoint.

At the start of the race Trulli ran wide at Turn 2, enabling Di Grassi to slip through into the lead. He then successfully defended his lead until the chequered flag.

That was not the end of the story, however, as a few hours after the race finished the FIA excluded the Brazilian because his car failed post-race scrutineering. It was discovered that the front wing fairings had been modified to include internal metal reinforcing rods.

Behind Di Grassi the racing had been very competitive, with d’Ambrosio (Dragon Racing) now promoted to the top step of the podium, Sebastién Buemi in second position and Loïc Duval (Dragon Racing) taking third.

For Michelin it was a job well done in difficult conditions. “The track evolved as the day progressed,” reported Serge Grisin, manager of Michelin’s Formula E programme. “The conditions improved and, although we knew the surface would be tough on tyres, we believed we would be able to contain the phenomenon of wear. And that’s exactly what happened. None of the drivers reported the slightest problem with their tyres and we are delighted to have risen so successfully to what was a sizeable challenge. Not only is the MICHELIN Pilot Sport EV competitive but it was also designed to be durable and today’s race provided further evidence of its extraordinary versatility.”