The so-called 'power wars' that manufacturers have engaged in are no longer relevant, amusing or helpful.

We’ve banged the manual gearbox drum for years now. Often to a chorus of criticism from those who think we’re being Luddites just for the sake of it. That’s never been the case. We’ve merely been fighting our corner in the hope that people of influence hear us and do what they can to ensure those of us that care can remain connected to the process of driving.

It seems we’ve been vindicated, as our cries haven’t fallen on deaf ears. At least not at Aston Martin, Porsche and Jaguar, all of whom have shown admirable commitment to the cause by offering cars with manual transmissions, even though they know the vast majority of customers will stick with the two-pedal option. Of course, it’s not all down to evo’s incessant whinging, but I’d be lying if I said it didn’t please me to see such cars being offered, not least because it proves people like us still have a voice.

So, seeing as we’re on something of a roll, I’m saddling up the next hobby horse – to challenge the industry and showroom assertion that more is more and faster is better. Have I lost my mind? Quite possibly, but having recently spent a few days in a new Audi RS6 Performance, I’m at a loss to understand where things can go from here. Yes, I know I sound like some creaky old coffin dodger, but that rampant RS6 crystallised what I and a few people whose opinions I trust have been muttering about between ourselves for some time: we simply don’t need to go any faster.

Now I’m not going to deny the RS6 Performance is a mighty and magnificent machine – five very comfortable seats and a huge luggage compartment propelled by a gnat’s wotnot under 600bhp, harnessed by all-wheel drive and controlled via a silky, sharp-shifting eight-speed automatic gearbox. It can go absurdly, shockingly fast, on pretty much any kind of road in pretty much any weather conditions short of pea-soup fog or sheet ice. All you have to do, metaphorically speaking, is cock it and pull the trigger. 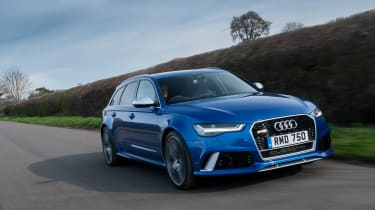 I’m not singling Audi out for criticism, just using the concept of a 600bhp estate car as an example of the age in which we live –one characterised by the paradox of blistering performance being so readily accessible, yet society’s attitude towards speed, and the fleeting opportunities to flout the law and use it, rendering such capabilities increasingly redundant. I’m not naive enough to suggest we all trundle along at the posted (non-urban) speed limits. But when the majority of the cars tested in this magazine can hit 100mph from rest in less than 10 seconds, and therefore punch from, say, 50mph to unprintable velocities in but a few blinks of the eye, anything more than a few furtive forays to the red line will see you travelling at speeds that would have Daily Mail headline writers in raptures. It wouldn’t be so bad if the same cars gave you anything back at lower speeds, but the truth is that in all but a few cases, the pleasure you get from driving them is inversely proportional to the value you attach to your driving licence.

At the height of the Cold War, when stockpiles of nuclear weapons had reached such absurd levels, East and West could annihilate each other umpteen times over in a situation known as MAD, or Mutually Assured Destruction. I feel like we’ve reached the same point with fast cars, be they hot hatches or hypercars. Where’s the sense in making it easier and easier to go faster and faster, when the point at which any of these cars could be exploited on the public road was passed decades ago?

Okay, a car like the Bugatti Chiron is an engineering Everest. That ‘because it’s there’ mentality would be fine if it just fuelled the ever-escalating game of Top Trumps played by the wealthiest – and possibly least imaginative – car collectors. Trouble is we’re all swept along on the same merry-go-round. The desire to beat benchmarks is a basic human impulse, so it’s understandable that engineers want to push the limits, just as it’s forgivable that we’re complicit in the whole tawdry affair. It’s just a shame our relationship with the industry has become that of junkies and pushers.

It’ll take a brave manufacturer to launch a high-performance model that’s slower than its predecessor, just as it would take an enlightened customer to buy it. But are we really so dumb as to think satisfaction can only come from going faster? Feel and fun should be the goals. The Campaign for Slower Cars starts here.