So you think the motorsport-inspired livery on your car is cool? It might be, says Meaden, as he plays arbiter of automotive taste

Could you do it? Could you really tick the box that commits you to ordering your brand new 991 GT3 RS in ‘Ultra Violet’? Or Vimto Purple, as would be the more accurate description. I’m not sure I could. Moreover, of the friends and acquaintances I know who are facing that decision for real, none of them can either. Which is a shame, as you can be certain that when the 991 GT3 RS is old enough to be regarded as a classic, it’ll be the handful of Ultra Violet cars that draw the most admiration and command the highest values.

Are those bold souls who do go for the outlandish option heroes or lunatics? Probably a bit of both. Even if they genuinely like the crazy colour they choose, it takes a special kind of person to take the plunge when they know it’ll most likely draw ridicule from their friends and, doubtless, warnings against short-term residual suicide from their dealer. Witness that other divisive Porsche RS colour, Rubystone. For years I’ve been unable to abide it, but now there’s a growing nucleus of extrovert atoms within me that wish my own 964 was pink and not Basalt Black. I’m not sure why that is, but it’s true.

The same goes for stripes and decals. The only misgiving I have about the Renaultsport Mégane 275 Trophy I used to run on evo’s Fast Fleet is the potentially dubious nature of the stickers attached to its flanks and front spoiler. A portion of me loves them – they’re part and parcel of the car’s uncompromising character – but the less charitable part of me thinks that if I saw someone had stuck some home-brew decals to the sides of their hot hatch, I’d probably think they were an idiot. Being factory standard adds authenticity and some kudos, but my own hypocrisy leaves me feeling conflicted. 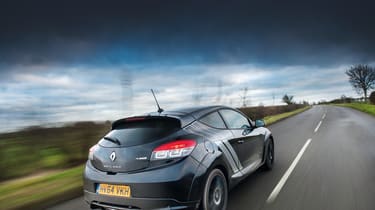 History normally offers useful insight on most topics, but I’m afraid it only muddies the waters on matters such as this. Look back to ’70s sports saloons such as the BMW 2002 Turbo and Mitsubishi 2000 Turbo – and I mean literally look back in your rear-view mirror – and you’d see that both sport gaudy reverse script on their chin spoilers. I’ve not driven either, but there’s never been a time when I haven’t loved these cars for their daft decals alone. But what was the consensus back in the day, when they were new? Sub-zero cool or utterly crass? Perhaps one of you older, wiser readers can enlighten me.

Issues of a car’s aesthetic embellishment and the contradictory emotions such exhibitionism arouses are not exclusive to hot hatches or laggy old forced-induction saloons. Even supercars leave me in the same quandary. If you asked me to picture an early Diablo SV, and more specifically the early Diablo SV I’d like to own, it would be a bright blue one with a huge, swirly ‘SV’ plastered on each side. Yet ask me to do the same with a Ferrari 599 GTO and it absolutely wouldn’t be one wearing stupid white roundels on the doors and some lame evocation of a classic racing livery that has the whiff of try-hard about it.

The list goes on. Ferrari 360 Challenge Stradale? Meaden-spec would have to come with the hugely expensive painted tricolore stripe or I simply wouldn’t acknowledge it as a true Stradale. 997 GT3 RS? Hmm, tricky one, that. I could never quite abide those vinyl chequers, or the single ‘GT3 RS’ script snaking up one haunch like a bad tattoo, but show me the nose of a 924 Carrera GT and I’d fight you to the death if you suggested the name decal running down the top of the right-front wing was anything less than iconic. Trouble is, if you come back and ask me about the GT3 RS’s stickers in ten years’ time, I’ll probably love ’em.

Even Aston and Bentley are getting in on the act, and inevitably causing me grief in the process. Both the limited-edition Vantage GT12 and Continental GT3-R quasi-racers wear more warpaint than a Magaluf hen party, but the fact they provide a credible link to each brand’s respective GT3 race programme should mean I love them equally. Yet why do I think the Aston is acceptable and the Bentley a bit dodgy? Such a moral stance can hardly be justified on grounds of taste, when both stray so far into territory that’s arguably unbecoming for two such noble marques.

Then again, perhaps it’s the shock value that bestows cult status on such divisive cars, and immediate (or belated) hero status on those who order them. This would certainly explain why I feel boundless admiration for the owner of any Alpina wearing the full-on stripe kit, for there are few things more incongruous than an elaborately pinstriped Beemer. It’s also why I’m going to make a point of shaking the hand of the first Ultra Violet 991 GT3 RS owner I meet, for they have taken the risk so the rest of us don’t have to. If that’s you then feel proud, for evo salutes you. And your Vimto Porsche.