Lewis Hamilton is in the best Formula 1 car, but he has also been instrumental in making Mercedes unbeatable

If winning in a Mercedes is so easy, why does Toto Wolff ask Daimler to send a cheque for $54million to Hamilton each year? 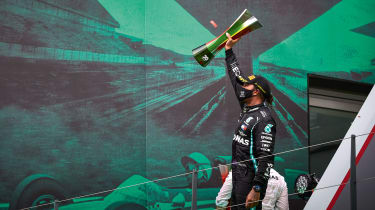 The best driver races the best car. You might have seen this quoted in press reports and across social media after Lewis Hamilton recorded the most Formula 1 race victories in history before going on to claim his seventh world title.

Naturally it sparked the tiresome debate that Hamilton’s achievement was down to the car rather than his ability behind the wheel. Hamilton is undoubtedly in the best car, but he has also been instrumental in making the Mercedes F1 racer an unbeatable car, just as Schumacher did at Ferrari. Technology may dictate the motorsport rules but you still need a driver to work with an engineering team to determine what does and doesn’t work. And to make those split-second decisions when they are three abreast heading into turn one.

But to denounce any driver’s achievement and put it all down to the car they have negotiated their way to race is a level of naivety that’s hard to comprehend. If winning in a Mercedes is so easy, why does Toto Wolff ask Daimler to send a cheque for $54million to Hamilton each year? Surely you’d pluck a driver willing to pay you for the opportunity to be a world champion, wouldn’t you? After all, there are plenty out there who think they could match Hamilton’s achievements given the same opportunities judging by the noise created each time he breaks another record.

And that’s the issue. Very few of us are in the position to know what it takes to be a professional sportsperson, even fewer will have the opportunity and only a handful will know what it’s like to be the best in the world at your chosen sport. Yet there are many who instantly dismiss some frankly staggering personal sporting achievements on the grounds it wasn’t all down to them.

But isn’t this true of all successful athletes? They rise to the top of their chosen sport because someone at sometime saw something special in them and invested time, money and resources in making them the best of the best.

From athletics to football, cycling to sailing, cricket to rugby, tennis to golf every person competing at the very top level is doing so because they are part of a team, both on and off the field. A team that recognises the potential of an individual’s talent and will do whatever it takes to get them to the very top.

Hamilton wasn’t the only driver to have been given the opportunity he was by Mercedes and McLaren at the beginning of his career, but it’s safe to say he grasped that opportunity tighter than any. He has also been instrumental in building a team around him – both personally and at Mercedes – that’s enabled him to make history we are unlikely to witness ever again in F1.

To read more from the current issue of evo order your copy here.