Harry gets to the Pagani factory, finds out why his Zonda's clutch keeps failing, and gets a shocking price list for F-based upgrades 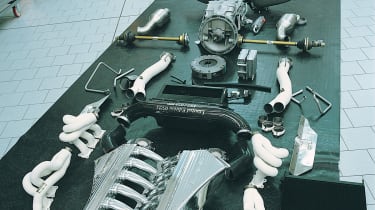 It was 10am when I arrived at the Pagani factory the morning after I had to be rescued in Modena because the Zonda’s clutch had failed again, yet already the back of my car was in pieces. And while two mechanics were busy stripping the gearbox, Horacio Pagani was grinning from ear to ear because he finally knew the reason why my clutch kept failing.

Turns out my car had a ‘dark’ period, as Horacio likes to call it, when the factory lost touch with it. C12 UFO started life as the UK press demonstrator, but after two years’ service it was sold to a new owner who had his own workshop, complete with full-time mechanics charged with looking after his extensive car collection. So the factory has no idea what work was carried out to my car from the time it was sold to the collector to the point where I bought it, but during this period Horacio remembers supplying a Zonda F clutch pedal to the UK, and he now knows it was fitted to my car.

The idea behind this was to make the clutch action lighter; the Zonda F’s pedal travels through a bigger arc, and the extra leverage this affords reduces the foot pressure needed to operate the clutch. Trouble is, you also have to change the position of the slave cylinder for it all to work properly, but when Horacio checked my car he saw that this hadn’t been done, so the clutch cylinder was badly misaligned, causing air to get into the system each time the pedal was pressed. Eureka!

I’d hinted to Horacio that while the car was in Italy it might be nice to investigate having a few ‘tweaks’ done by plundering some of the tasty bits he’s developed for the F. In response to this he’d laid out all the F bits on the workshop floor to show me just how much could be changed. I could feel the colour draining from my face when he told me the total price of these parts would be 169,400 euros (£115,000)!

He must have seen I was reeling, as he quickly suggested some cheaper ideas of his own. Apparently the best thing I could do would be to change the final drive ratio and differential to those from the F. Cost: 10,000 euros (£6800). Next on the list were new brakes – as it turns out my discs were the original items and should have been changed ages ago. Cost: 1,066 euros (£725) a corner.

Just before I left, Horacio promised he would give the car a road test after the gearbox had been updated and let me know of any other changes he thought would be worthwhile. Two weeks later I received a list detailing what he had done:

Now all I need to do is book a flight so that I can try the car for myself. This has all the makings of a perfect summer…