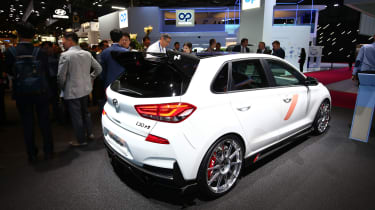 The Hyundai i30 N has proved without any doubt that Hyundai is capable of a creating a serious, and seriously fun, performance car. But the Korean hot hatch can look a little subtle, especially if its not painted in the light blue launch colour, or when you compare it to some other hot hatches – the Honda Civic Type R, for example.

Hyundai’s new option package, previewed at the Paris motor show, gives us a taste of how extreme future i30 Ns and other performance Hyundais could look. Although it’s just a show car, the Hyundai i30 N ‘N Option’ features a selection of parts that customers will be able to have fitted to their cars from the factory when N Option is officially launched.

This level of customisation is rarely seen from a manufacturer, it’s only aftermarket tuners offer such a wide variety of parts and the ability to transform a relatively understated car into something as aggressive as this show car. 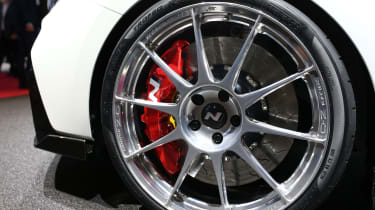 While no further performance modifications have been announced as yet, the show car does wear 20-inch cast alloy wheels (up an inch from those on the i30 N Performance) wrapped in ‘semi-slick tyres’. Additionally, the i30’s styling gains a prominent rear wing and pronounced side sills, and front and rear splitters all made from carbon fibre.

Equally dramatic is the vented bonnet, while emerging from the rear splitter and diffuser combination is a set of quad tailpipes, which presumably feature the same active exhaust technology as on the i30 N Performance. An extra red graphical element surrounds the lower grille, and there’s a large Hyundai N graphic along the sides of the car over the matt paintwork. 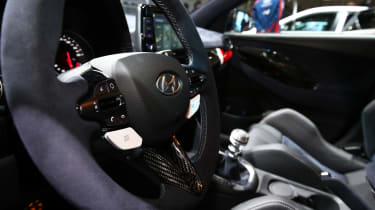 The interior too gets the N Option touch, most obviously in the form of lightweight sports bucket seats with heavy bolstering and Alcantara trim. The steering wheel is also trimmed in Alcantara (the standard wheel is leather) with carbon accents, while criticisms that the standard car feels a little cheaply trimmed in places should be minimised by the Alcantara dashboard, door cards and cubby box trim, complemented by carbon fibre inserts.

The overall effect doesn’t quite have the impact of Hyundai’s i30 TCR car – the wide arches will have to wait for another day – but do give the production car enormous presence.

Hyundai is pitching N Option as the other extreme to that of the N-Line versions in the line-up, which offer a taste of Hyundai’s motorsport brand without committing to the full performance cars. The company says N Option will be officially launched ‘in the near future’. 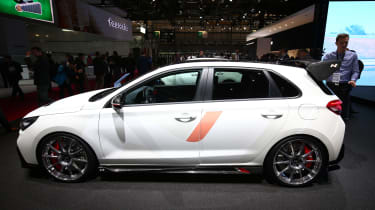