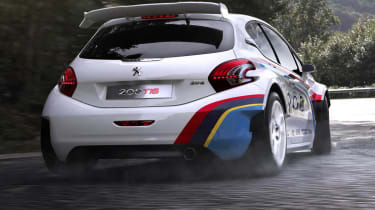 Peugeot has announced that it will compete at the 2013 Pikes Peak hillclimb in June. The company will race in the Unlimited Class using a specially tuned Pikes Peak version of its Peugeot 208 T16, driven by rally legend Sebastien Loeb. The Frenchman retired from WRC competition at the conclusion of the 2012 season after nine consecutive championship titles, more than any other driver in the sport's history. Along with piloting the 208 T16 Pikes Peak in Colorado this summer, Loeb will drive a McLaren MP4-12C in the FIA GT Series, as well as the Citroen DS3 WRC car on a part-time basis.  Loeb isn’t the first great driver to represent Peugeot at Pikes Peak, though – Ari Vatanen won the event in 1988 with a 405 T16, a feat Bobby Unser repeated the following year in the same car.  The 208 T16 Pikes Peak is another addition to an already expansive range of 208-based racing cars. Among them are the 208 R2, 208 Racing Cup and a Peugeot Sport edition of the Peugeot 208 GTI that will compete at the Nurburgring 24-hour endurance race this May.

A Peugeot supermini in 2020 is a very different beast to those that came before; it’s clever, stylish and hides a sweet chassis that’s clawing to get …