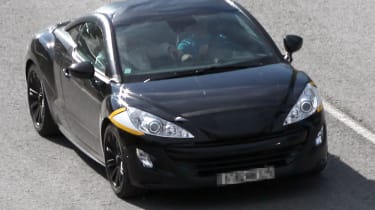 Peugeot's RCZ coupe is nearly production ready, and has been spied out testing in reasonably minimal disguise to prove it.

The car is set to ape the Audi TT in both style and performance, and like the TT its styling looks set to transfer from motor show to road with very little change. The dramatic curves and swathes remain, as do the oversized headlights and twin roof bubbles towards the rear, which replicate the downforce a less svelte rear wing would create.

There's set to be a decent range of engines with most tastes catered for. The range-topper will get a version of the 1.6-litre turbo petrol from the Mini John Cooper Works, with 218bhp on tap and a sub-7-sec 0-60mph time. Top speed should be approaching 150mph.

Further down the RCZ range there’ll be the petrol-powered 148bhp 1.6-litre turbo from the 308 hatch and, key in premium cars these days, diesel choices with some of Peugeot’s excellent HDIs available including the 134bhp 2-litre unit which also features in the regular 308.

Inside, expect it to closely resemble the 308CC convertible – a good thing, as that car sports one of Peugeot’s best ever interiors, with quality, fit and finish up markedly on older cars.

The production-spec 308 RCZ will be revealed at September’s Frankfurt motor show, with sales starting in early 2010. Prices should kick off well below that of the Audi TT, at a smidgen under £20K. In the meantime you can read our first impressions of the Peugeot RCZ concept car.