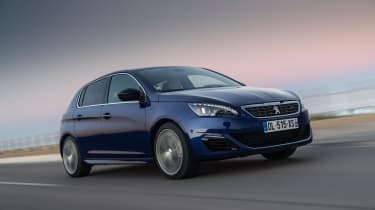 Peugeot has announced full pricing and specification details for the 308 GT – the highest-spec version of the firm’s Ford Focus and Volkwagen Golf rival.

While not quite specified to full GTi trim – one of those is expected to appear towards the end of 2015 – the GT still packs a 1.6-litre THP petrol engine with a twin-scroll turbocharger, developing 202bhp and 210lb ft of torque.

A 0-62mph sprint of 7.5sec is the result, along with a 146mph top speed. The tradeoff at the pumps is a reasonable 50.4mpg – significantly more economical than a Kia Ceed GT with similar displacement and power figures.

For those seeking greater frugality there’s the 176bhp GT BlueHDi, which achieves 70.6mpg on the European combined cycle. Also available in SW estate form, the BlueHDi reaches 62mph 0.9sec after its petrol-fuelled counterpart and runs out of steam 10mph before the petrol at the top end. 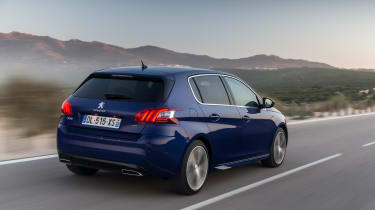 Suspension under each car is largely similar to other 308s – pseudo MacPherson struts at the front and a torsion beam at the rear – but ride height 7mm lower at the front and 10mm lower at the rear and tweaked settings should enhance the 308’s dynamics. The company does say that the setup aims to maintain the standard car’s comfort, so those seeking something sharper may be inclined to wait for the sportier GTi.

Sitting behind the 18in alloy wheels and corresponding Michelin Pilot Sport 3 tyres are 330mm at the front and 268mm at the rear, while the SW gets larger 290mm discs at the back. 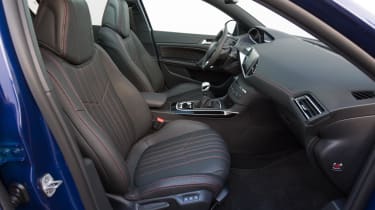 A standard Driver Sport Pack endows the exhaust with greater rort, brings red-tinged instruments and features an instrument panel with power, torque, turbo pressure and G-force figures. The electric power steering and electric throttle have also been remapped for greater response and feel.

Styling is subtle – extending to the car’s unique shade of Magnetic Blue paintwork – but twin exhaust tailpipes and subtle side skirts mark the GT out from its lesser counterparts. The same goes for the GT’s interior. Trimmed in red-stitched leather, other GT features include aluminium detailing on the pedals and new graphics on the dashboard’s central screen.

Pricing starts at £23,995 for the petrol hatchback and rises to £26,545 for the BlueHDi SW. Order books are open now, with deliveries due to start in March.