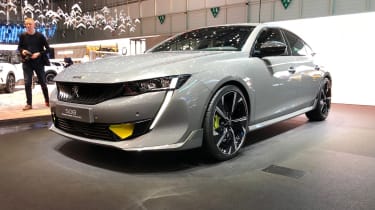 It's not often a mid-sized French saloon excites us here at evo, but there are quite a few reasons to get excited about the new 508 PSE, not least its combined 496bhp power output. Granted, figures from plug-in hybrids must always be taken with a pinch of salt, Peugeot's thinly veiled concept version of the Peugeot 508 Fastback will arrive next year.

That spectacular headline figure is generated from three separate sources, namely a 1.6-litre turbocharged four-cylinder engine producing 197bhp paired to a 108bhp electric motor under the bonnet powering the front wheels via an eight-speed e-8EAT automatic transmission, while a second electric motor with 197bhp powers the rears. This is not an unusual layout for PSA, having introduced similar packages on models like the 3008 Hybrid4, but never has the manufacturer released one with quite so much punch. On the road, these power units will result in an equivalent peak power of somewhere around 400bhp, as all three units do not produce those peak numbers at the same time, hence the lower real-world output.

This is also the first hybrid model to come from Peugeot Sport – the performance arm responsible for turning the previous 208 GTi from a supermini also-ran into the stirring 208 GTi by PS that won our hearts late into its model cycle. Peugeot has released numbers too, with a 0-62mph time of just 4.3sec. The electric motors are fed from an 11.8kWh battery pack that Peugeot says will allow up to 31 miles of EV driving on the new WLTP cycle.

The main limiting factor in occasion is likely to be the weight. Peugeot has not released any figures, but we expect a generous jump over the standard car, which in top-spec 2-litre diesel form already nearly brushes 1700kg (1683kg to be precise).

The 508’s sleek lines have been given a subtle overhaul too, sharing its underlying design with the standard car, but turning up the aggression with new splitters, diffusers and other aero appendages. To improve cooling, Peugeot has opened up the lower grille section and fitted a one-off 3D-printed upper grille section.

New 20-inch wheels cover uprated front brakes, the calipers painted in a chartreuse yellow that also appears on other design elements inside and out. A curious addition are the small aerofoils situated behind the rear windows. The cabin is mostly unchanged from the standard car, aside from colour and trim changes. Chartreuse yellow also makes an appearance here, lining the doors, dash, seats and steering wheel.

Although a concept at this stage, we’ll see a production model arrive in 2020 with many of the concept car’s elements brought across. Peugeot Sport is in for a busy year too, as we might also see a new 208 GTi in both petrol, and whisper it, full EV forms too. The fight for traditional performance cars in the future might be inevitable, but at least Peugeot looks ready to approach the problem with some genuine innovation and will. 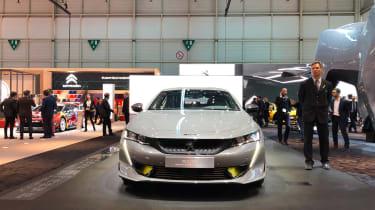 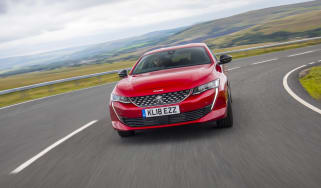