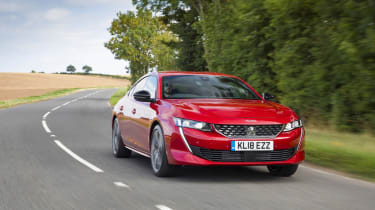 Dust is still settling from the WLTP economy and emissions shake-up, but it’s fair to say that no 508 has a particularly voracious appetite for fossil fuels given the size of the car. At its most frugal, in 1.5-litre diesel form with a low trim level and manual gearbox, the fastback is capable of up to 58.9mpg - and remember, WLTP numbers are much closer to reality than the old NEDC figures, where the same car was rated at over 74mpg.

The mid-range 2-litre, 160PS diesel is nearer the 49.6mpg mark (with an auto ‘box, while the more potent diesel in the 508 GT, also automatic, is marginally thirstier at 48.7mpg. Again, both these figures should be within reach, particularly as on a fairly conventional motorway run we were able to eclipse the 1.6 PureTech 225’s official 38.7 mpg, with numbers in the low 40s seemingly easy to achieve.

Naturally, your mileage may vary, and enthusiastic use of any of the engines - but the petrols especially - will result in tumbling numbers. Ditto using Sport mode, but in its other drive modes the 8-speed was happy to shuffle up to high gears at low revs.

It’s too early to call other running costs at the moment, but it’s worth bearing in mind the potential expense of new tyres - a set of replacement 235/45 R19 Michelin Pilot Sport 4s for the 508 GT will set you back around £760 fitted from Blackcircles.