Another sign electric cars are maturing to become competent and clever. But while the Polestar 2 makes a great everyday car, it’s still no performance hero 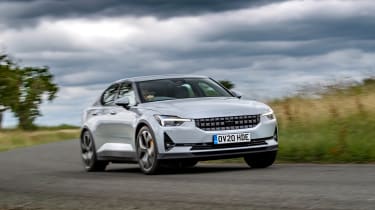 It’s rare that you get the chance to experience the first impression of not just a new model, but also a new brand. Granted, as the name might suggest, this is the second model to come from Volvo’s now completely separate performance brand, but while the expensive, limited-run plug-in Polestar 1 was an attractive halo model for the marque, it’s the all-electric Polestar 2 that’s a more representative example of where the fresh Swedish brand is headed.

So what we have in effect here is a slightly high-riding, five-door, all-electric hatchback that plays the role both of mass-market leader and rival disruptor to the Tesla Model 3. Starting at just under £50,000, the Polestar 2 will be launched with a 400bhp electric powertrain, all-wheel drive and single high-standard specification in order to rival mid-level Model 3s.

The model we’re driving today includes the Performance Pack, which brings high-end Öhlins dampers and a chunky Brembo brake package to the party, amongst other equipment upgrades, but the question of what the Polestar 2 actually is here is less relevant than the big one facing it.

As the first heavyweight rival to the Model 3, is the Polestar 2 the car it needs to be in order to upset the status quo that Tesla has so very effectively established both in the UK and abroad? Tesla Model 3 sales are extremely strong, but it still has plenty of flaws for a competitor to swoop in and steal its thunder. 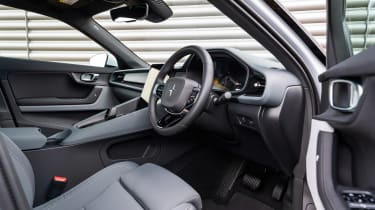 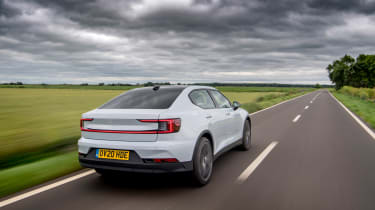 The Polestar 2 will initially be launched in a single model, that’s available with or without an optional £5000 Performance Pack. Prices starts at £49,990 not including the £3000 government grant, and comes with a very long standard equipment list including a full active safety suite, a glass roof, heated and electric seats front and back, a premium sound system, active LED lights all around, 19-inch alloys – the list goes on. Rather than just settle on a roster of standard equipment borrowed from Volvo, the Polestar 2 also features a few of its own technologies too, including frameless side mirrors (that are excellent and should be fitted to all new cars), a top-level air filtration system (that says much about the world in 2020 doesn’t it?) and a brand new Google-designed operating system within the sleek infotainment screen.

The aforementioned Performance Pack version focuses on mechanical changes, although it doesn’t have any more power than the standard model. Included in the pack are larger forged 20-inch wheels, Brembo brakes, gold design details around the exterior and cabin, and a set of fancy adjustable dual-flow valve Öhlins dampers.

As for rivals, well, the Polestar enters the marketplace aimed well and truly at the Tesla Model 3. It’s £50k price point puts it a fair chunk above the standard Tesla Model 3 which starts at £40,490, and should instead be compared against the more comparable £46,990 all-wheel-drive Model 3 Dual Motor. Critical specs compare far more closely between the standard Polestar 2 and Dual Motor.

Established rivals with an all-electric powertrain are few and far between for the moment, but consider plug-in hybrid models and BMW, Audi and Mercedes-Benz all have models that could be considered rivals. Despite the rush towards EVs there isn’t too much in the pipeline to directly compete with the Polestar 2 and Model 3 either, with only BMW’s new i4 likely to be considered a direct rival.