Although overshadowed by the 911, the 924's sales impact was a significant factor in the company's success 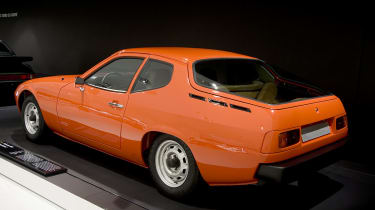 Having existed in the shadow of the unique, enduring and celebrated 911, it’s easy to understand how the Porsche 924 could be overlooked, but its significance to both the company that created it and to the people who owned and drove one should not be underestimated, because not only was the 924 a great sales success for Porsche, helping to secure the future of the company and therefore the 911 too, it also introduced the Porsche brand to a whole new audience.

Not that project EA425 started out as a Porsche. Back in 1972, newly appointed Volkswagen chairman Rudolf Leiding was keen to lift his company’s image and decided that a mid-market 2+2 sports coupe would be the perfect way to do it. Rather than attempting to develop the new car in-house, though, Leiding turned to Porsche, who not only had obvious expertise in this area, but who already handled a great deal of development work for VW.

The design of the car would be left to Porsche, but to keep the price down it would have to use existing VW parts wherever possible, and unlike the mid-engined, air-cooled 914 that the two companies had previously collaborated on, the new car would have to sport a front-mounted water-cooled engine, to match the new Golf and Passat.

Porsche submitted three styling proposals to VW as fifth-scale models, and Leiding chose the one by a young Harm Lagaay, the Dutch designer who would go on to be responsible for the Boxster, Cayenne, Carrera GT and numerous 911s. Relatively inexperienced at the time, Lagaay struggled initially to adjust the car’s proportions as the model was scaled up to full size – ‘The first ones looked like potatoes,’ he would later admit – but the rounded wedge shape he intended would eventually emerge.

While a few familiar VW components could be found on the car’s exterior, it was under the skin where they were employed in abundance. The engine was a 2-litre in-line four-cylinder from the Audi 100 and VW LT van, albeit equipped with a Porsche-designed head and Bosch K-Jetronic fuel injection to give 125bhp, and canted at 40 degrees from the vertical to fit beneath Lagaay’s low bonnet line. Power was delivered to the rear wheels via a four-speed Audi gearbox, a transaxle arrangement helping to achieve a near-perfect 52:48 front:rear weight distribution, while the car’s suspension was a hybrid of parts from the Golf, Beetle and Type 181 military vehicle.

By 1974, the first prototypes were up and running, but the future of the project was under threat. In the wake of the previous year’s oil crisis, Volkswagen, now under the leadership of ex-Ford man Tony Schmücker, decided to put its sports car on hold. Porsche, however, was less keen to give up, so offered to buy the project from VW, seeing the car’s potential as an entry-level model for its own range, a perfect partner for the forthcoming V8-engined 928 (especially with increasingly restrictive safety, noise and emissions regulations in the US putting the future of the rear-engined, air-cooled 911 in doubt). In January 1975 a deal was struck for an undisclosed sum, reputed to be in the region of $40m and almost certainly less than VW had paid Porsche to develop the car in the first place, although more money would now need to be spent bringing the car, and particularly its interior, up to the standards expected from a Porsche.

Production of the 924 would begin in November of the same year, the cars being built by VW at the old NSU factory at Neckarsulm, less than 30 miles from Porsche’s Stuttgart HQ. Initial reactions to the car were mixed, some praising its handling and performance (although not so much in the US, where smog-reduction measures saw its output reduced to a paltry 95bhp), others deriding it for not being a ‘true’ Porsche (if only they knew what was to come a few decades later…).

But its price (about £7K in the UK) meant there was no shortage of interest from customers eager to get their first taste of a Porsche. More than 150,000 924s would be sold during the car’s 12-year run, and its credibility would be enhanced along the way with the arrival of the more powerful Turbo and Porsche-engined ‘S’ derivatives. And, of course, it would evolve into the 944 and eventually the 968. It may not have been the purest of Porsches, but the company’s history would undoubtedly be poorer without it.