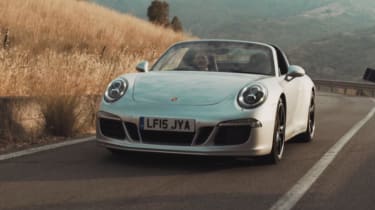 Porsche’s personalisation arm, Porsche Exclusive, has confirmed the production of 10 bespoke examples of the 911 Targa 4S. Only available to order from the carmaker’s London Mayfair showroom, the Targa 4S Exclusive gains several performance and styling features as standard.

Heading the list is the Powerkit, which ups power from 394bhp to 424bhp and adds a more vocal sports exhaust. Power is sent to all four wheels via Porsche’s fast-changing PDK gearbox as standard, while the addition of the Sport Chrono package adds dynamic engine mounts and a dash-mounted stopwatch. 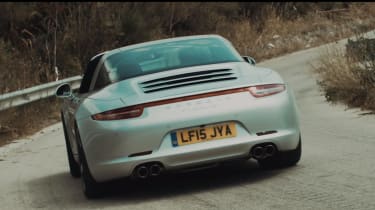 To set the Mayfair Targa 4S apart from its more common siblings, Porsche Exclusive lettering is added to the car’s seat centres, while 20-inch Sport Classic wheels come painted in black and LED headlights are included. On top of this, buyers can extensively customise features like interior stitching, leather trim, embossing and seat belt buckle colours. 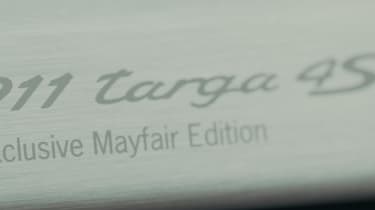 Completing the specs list is an ungraded Burmester sound system, a personalised leather key pouch and photobook for each car.

While the 911 Targa 4S isn’t the sharpest of 911s in standard form, its structure is more rigid than the entirely roofless convertible, making for sharper handling and better refinement.

Porsche Exclusive has also revealed three bespoke versions of the Cayman S to demonstrate its customisation potential. With a range of colours and trim available for parts both inside and out, it’s possible for buyers to use Porsche Exclusive’s service to create an entirely bespoke Cayman S.

To set the car apart from the regular model, the Exclusive’s exterior gains black paint on the headlight washers, lower half of the mirrors, spokes of the 20-inch SportTechno wheels and side air intakes. Cayman S lettering on the doors is also coloured in black, while the taillights gain light tinting to match. 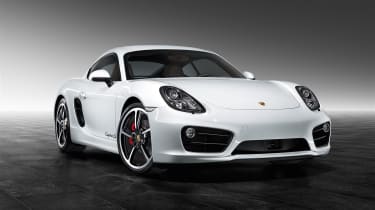 Inside, the dials and Sport Chrono stopwatch are painted in the car’s exterior colour, as is the centre console trim that surrounds the gear lever, door and dash trim. The vent slats and rear-view mirror are now wrapped in leather, and between the passengers, the storage lid now wears Porsche embossing.

Just three exterior colours are presented – white, Agate Grey Metallic and Racing Yellow – the last of which also comes with yellow seatbelts. But while it certainly looks racy, this car's yellow dash trim might be a little too garish for some buyers’ tastes.

Since it’s based on the Cayman S, Exclusive cars still utilise power from the same 321bhp and 273lb ft of torque 3.4-litre flat-six ensuring performance remains unchanged – the Cayman S can accelerate from 0 to 62mph in an evo tested 4.5sec (three tenths faster than listed) and onto a claimed top speed of 175mph. 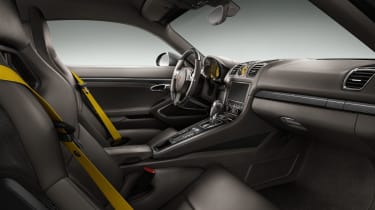 We’re fans of the car at evo, having enjoyed its planted yet playful chassis and surprisingly feelsome electric power steering on our tests. The gearing is admittedly a tad too long, but only because it reduces the amount of time you can spend winding out the Cayman’s silky toned naturally aspirated flat-six.

We’re yet to confirm the exact pricing of these Exclusive Cayman Ss, but given the extent of customisation on offer, we can safely assume even the most basic Exclusive will comfortably surpass the regular car’s £48,783 list price.