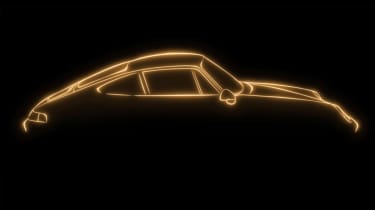 It may sound like a plot for world domination from a particularly garish James Bond villain, but Project Gold is actually Porsche Classic’s latest restoration project, this time taking the form of a thoroughly refurbished 993-generation 911 Turbo.

Teased in a series of videos, the new model is to take inspiration from the recent 991 Turbo S Exclusive Series, a gold-painted limited-edition version of the Turbo S with some revised styling features and bespoke black and gold centre-lock wheels.

As seen in the videos, the Project Gold 993 is likely to maintain a similar body-in-white to the standard car, although it does look to pick up a new badging location on the front wing. The second video shows off some laser-etched wheels, mimicking the Exclusive’s combination of black and gold, only here used on the 993 Turbo’s standard 17-inch hollow-spoke alloys.

The third video shows a craftsman working on the interior, upholstering it in black leather. Notable features include contrasting gold stitching and an underlayer of gold leather beneath perforated black leather, creating two subtle stripes down the seat back and base.

Little else is known about the car, including whether it will feature upgraded technical components, not to mention if it’s being built as a customer commission or a Porsche museum model. Regardless, as an exercise in displaying Porsche Classic’s ability to turn your tired old 911 into something particularly special, it will doubtlessly be finished with supreme finesse and attention to detail.