With the best chassis options and some extra power, we’re looking forward to the 718 GTS 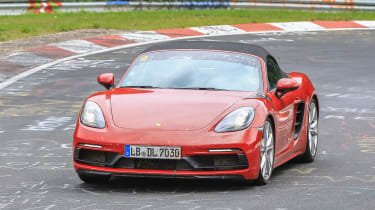 Porsche’s GTS models have often been evo favourites. The combination of a little extra power and the best bits from the options list in a cost effective package is a recipe for success.

The Macan in GTS form is our pick of the bunch and the old naturally aspirated V8 Cayenne GTS had its own appeal. While the new 911 GTS isn’t quite as visceral and intense as a GT3, it would even be our choice over the standard 911 Turbo.

> Read our review of the Porsche 911 GTS

Bouyed by sales success, Porsche has taken to applying the badge to each model range. That means a Panamera GTS is likely to appear soon and, as we suspect the car in these pictures to represent, a 718 Boxster GTS, too.

Given the predictability of a 718 GTS , it seems Porsche hasn’t worried too much in disguising the new car. In fairness it hasn’t actually put a GTS badge on it, but the Porsche script below the rear wing is in black, a GTS trademark. 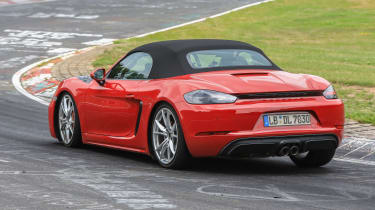 In any case, GTS models rarely look much different to the standard models. The spied 718 Boxster GTS shows a slightly different design of front bumper, with black moustache-like winglets in the lower opening. The rear diffuser around the twin centre-exit exhausts is still the same shape, however the internal design is slightly different. As it’s black, though, the change isn’t that obvious.

> Porsche 718 Boxster review - was swapping two cylinders for a turbo a good idea?

Porsche’s GTS models usually come with black wheels as standard. This car seems to be sporting the 718’s optional 20-inch wheels in silver, but expect them to be black when the car reaches production.

Although there are no official details on the 718 Boxster GTS yet, because the GTS formula tends to follow familiar lines we can make a fairly good guess as to what to expect. Based on the Boxster 718 S, with its 2.5-litre turbocharged flat-four engine, expect the GTS to have around 370bhp – around 25bhp more – given modern, turbocharged GTS models have benefitted from a 6 to 7 per cent power increase over regular S models.

This should improve the 718’s 0-62mph time of 4.4sec (or 4.6sec for the manual version) by a tenth of a second, or two. The 718’s optional sports exhaust, or specific GTS pipes, are likely to be standard.

As well as more power, the GTSs come with a variety of suspension upgrades: the previous Boxster GTS came with Porsche Active Suspension Management (PASM), the Sport Chrono Pack and active engine and transmission mounts. We suspect the new car will have much the same specification, and will also be available with both a manual and PDK transmissions.

> Find out what the old, naturally aspirated Boxster GTS was like to drive

As with the exterior, the 718’s cockpit isn’t likely to change much. Expect sports seats, the Sport Chrono clock and, possibly, the optional small 918-style steering wheel.

As the 718 Boxster is mechanically the same as the coupe Cayman, expect the latter in to be available in GTS form with identical specifications and equipment as the roadster. The official unveiling of the 718 Boxster and Cayman GTS should be early next year.