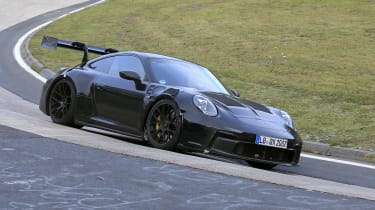 Few road cars come with a bigger weight of expectation than the Porsche 911 GT3 RS. Every version, from that first Carrera White and red painted 996.2 right through to the latest Lizard Green 991.2, has imbued the very essence of everything we at evo hold most high. Following first sightings in August, our spy photographers have now spotted the latest iteration undergoing tests at the Nürburgring.

There are a few reasons why there’s little doubt we’re looking at the next 992-generation GT3 RS, and they start with this prototype’s body. As has been the case with GT3 RS models since the 991.1, the new car looks to share the contemporary Turbo’s wider haunches. Although the side-scoops are covered up, we can tell this uses the wider body both from the overall shape and the raised leading edge of the rear haunch leading up to the engine cover.

The front wings also look new, both being wider and ventilated like those of the 991 to help relieve air pressure in the front wheel arches. The front bumper itself looks similar to those of other 992 GT3 prototypes, with a single central opening that then splits fast moving air straight into the front-mounted radiators. On either side of this central intake are what looks like two small brake ducts, diverting air into the front arches. 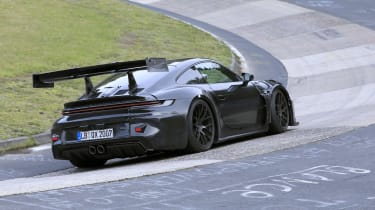 The bonnet on the other hand looks to have a completely different air management system to the one of the 991.2, switching from integrating two small ram air intakes in favour of big ventilation openings.

Something that’s impossible to ignore is the rear wing, which is both bi-plane and top mounted. It’s also massive, looking like a development from an RSR racer. In production, it’s unlikely to be quite so big, but as roadcar aero goes it will still be pretty spectacular. The wing’s mounting point is also interesting, being significantly further forward than on previous GT3 models, leaving room for a completely segmented duck-tail that looks to have cooling vents on its underside. Like the main wing, this ducktail won’t be production-specific, but it still does give us an idea as to the function that component should have on the production GT3 RS.

Other typical GT3 RS elements are obvious too, such as the centrally-mounted exhaust system sitting in amongst a rear diffuser, and the staggered 20/21-inch magnesium wheels borrowed from Weissach package-equipped GT3 RS and GT2 RS models. This prototype’s tyre footprint is also identical to the 991, with 265/35 ZR20 front tyres and 325/30 ZR21 rears. This prototype is also running Porsche’s PCCB carbon ceramic brake package, which has typically been an option on RS models. 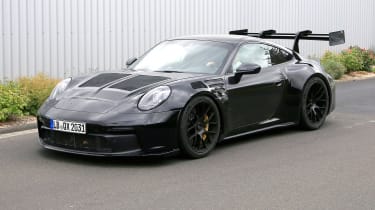 The GT3 RS’s powertrain should retain the atmospheric flat-six engine and PDK combination of the 991, but specifically what engine and gearbox it features is as yet unknown. While the GT3 will probably offer a manual transmission, we suspect the heightened track focus of the RS will make it PDK only. Power should be subtly lifted over the current GT3 RS’s 512bhp.

This year has already been stacked with 992-generation 911 derivative launches, so we expect the RS to be revealed later in 2021, giving the next GT3 some time to establish itself after its reveal late this year.