Set to join its lesser 4S sibling next year, Porsche has been spotted testing the upcoming Targa 4 GTS 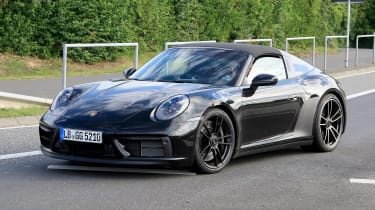 We’ve only just stepped behind the wheel of the 992-generation Targa 4S, however our spy photographers have already spotted Porsche testing a GTS derivative at the Nürburgring. Details are still under wraps, but we expect the Targa 4S to coincide with the wider GTS range across Coupe and Cabriolet body styles in the next few months.

Stuttgart’s retro-inspired 911 has retained its roll hoop for the 992 generation, already making an appearance in the Targa 4 and 4S revealed in May. As before, the fabric middle section is electrically retractable, slipping underneath the wraparound glass to create the targa effect. As before there’s a subtle nod to the 1970s original with three vertical slip vents on the hoop, which in GTS models is finished in black to contrast against the silver of other Targa models.

The Targa GTS will otherwise follow the same recipe as the Coupe and Cabriolet, combining many of the 911’s dynamic options into one model as standard. The mule spotted undergoing testing is almost entirely free of camouflage, showing off its Sports Design front and rear bumpers, alongside the five-spoke centre-lock wheels from the 992 Turbo S and clear lights for a more aggressive look. These elements have historically been fitted as standard on GTS models, although all are optional on standard Targa models.

Power will be derived from the same 3.0-litre turbocharged flat-six as other Carrera models, but feature a subtle bump in power for additional performance - based on previous power hikes between the models, a figure of around 475bhp is likely, a healthy jump from the 444bhp 4S. 0-62mph will come a few tenths sooner than the 3.8secs of the current range-topping Targa, with top speed coming at just shy of 200mph. It remains to be seen whether GTS models will be available with the optional seven-speed manual.

Prices are likely to start from in the region of £120,000 for the Targa, with Coupe and Cabriolet models sitting just below in price.