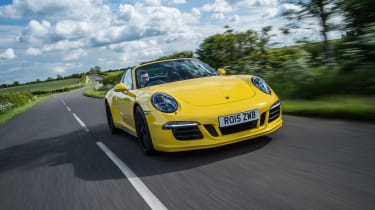 The Porsche 911 Targa is a car that has divided opinion in the evo offices. The folding roof adds 110Kg to the coupe’s 1400Kg kerb weight and makes the Targa 40Kg heavier than the convertible. So then, it's a heavy 911.

What the Targa gains in weight is more than made up for in looks, safety and stiffness over the convertible. The Targa has real exotic presence on the road, too, that even the standard 911 lacks.

In terms of driving dynamics, the Targa offers a different experience to the 911. It doesn’t have the sharpness and speed of response of its coupe siblings, and that extra weight makes itself known off the line and during quick directional changes, but at its heart the Targa is still a pure 911.

In GTS trim, the Targa retains plenty of dynamic ability that makes driving it as exciting as you'd expect from a Porsche. It just doesn't reach quite the heights of its hard-top cousin.

The engine in particular is a peach, with the capacity for deep lunges up the speedo when you're in the correct gear and a fierce top-end kick at around 6000rpm.

If an unscientific office poll we conducted is anything to go by, you're either a Targa person or not. The extra safety and rigidity offered by the rollover hoop wins fans among the cabrio haters, while the coupe lovers point to the 85kg weight increase. - Nick Trott, evo 210

The standard 7-speed manual gearbox is a big improvement over the previous-gen.

It's also worth considering spending the extra £7325 for the GTS as we believe the GTS to be the best spec for the 991 range, no matter the body style.

Performance and 0-62 time > The Targa trades out-and-out performance for increased visceral thrills. That's not to say it's not fast, however.

Engine and gearbox > A Porsche strong-point for years now, the 911's straight-six sings even more clearly with the Targa top open. Performance is only slightly muted by the extra weight, too.

Ride and handling > Unlike the convertible 911, the Targa GTS' added weight isn't noticeable on the road. The car's overall setup is softer than that of the GTS coupe, but this only heightens the Targa's more relaxed character.

Prices, specs and rivals > Don't be fooled by the cheap list price, ticking a few options boxes will soon see the price rocket up. But amongst its competitors, the 911 Targa GTS is a compelling choice.

Interior and tech > Alcantara and contrasting stitching mixes with superb control weights and a lovely seating position. The car's satnav, on the other hand, is a real let down.

Design > The Targa is proving to be a bit of a Marmite 911, dividing opinion as to whether the complicated roof mechanism and its added mass are worth speccing for the looks. The GTS gets bespoke features to emphasise its more focused setup, but in some ways these contrast the Targa's classic appeal. 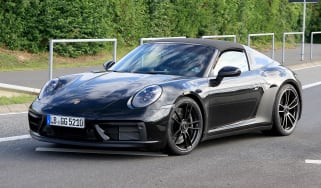 New 911 Targa 4S offers coupe usability with more style than a convertible, but four-wheel drive only will put off those looking for the purist 911 dr…
2020 Porsche 911 Targa 4S Heritage Design edition revealed 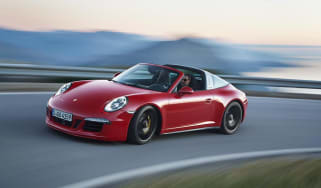