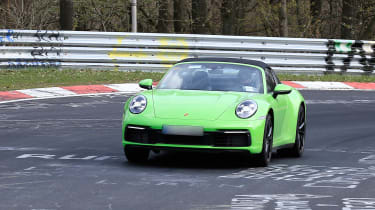 Porsche has been spotted testing the 992-generation 911 Targa before its release later this year. Like the 991 generation that came before, Porsche has decided to give the next Targa a retro nod with its single roll hoop, which sits atop an identical body-in-white to the recently revealed 911 Cabriolet.

As before, we expect the fabric middle section to be electrically retractable, slipping underneath the wraparound glass to create the targa effect, while again there’s the subtle nod to the 1970s original with three vertical slip vents on the hoop.

The Targa is otherwise identical to the Coupe and Cabriolet, boasting a myriad of personalisation options such as the Sports Design package, but whereas the previous generation was limited to the all-wheel-drive Carrera 4, the 992’s adoption of the wide body across the range could see Porsche offer a two-wheel-drive Targa once again.

The new Targa will be fitted with the same 3-litre turbocharged flat-six as seen in the Carrera S Coupe, with a slightly less potent non-S model also in the works.

What’s less certain is whether Porsche intends to spread the Targa body beyond its traditional Carrera derivatives. Historically, Porsche has rarely offered a ‘Targa Turbo’, but with the new 911’s improved GT credentials, it might well offer a rather interesting alternative to traditional grand tourers such as the Bentley Continental GT, or McLaren’s incoming GT.

Either way, if a 911 Cabriolet is not really your cup of tea, but you want something a little more open than the Coupe fitted with an optional sunroof, the new 992 Targa should remain a different option with a retro twist.