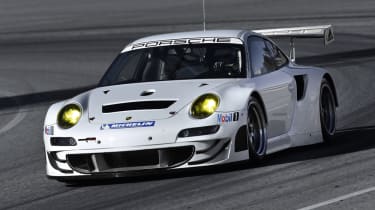 Porsche has released details of its new 911 GT3 RSR race car. The RSR is the fastest customer 911s available and is eligible for numerous championships and events up to and including the Le Mans 24 hours.

Based on the outgoing 997-shaped 911, Porsche has chosen the 4.0-litre version of its six-cylinder boxer engine to power the RSR and it produces 454bhp in this guise (the road-going 911 GT3 RS 4.0 boasts 493bhp). Power is channeled through a sequential six-speed gearbox with steering wheel mounted paddles.

The race car takes numerous styling cues from its road going cousins. It has flared front and rear wheel arches and openings in the wheel arches that echo the 911 Turbo road car. The air scoop on the engine cover is also reminiscent of the 911 GT2 RS road car. Where it differs from its showroom cousins is its wildly dramatic styling; it's 48mm wider than the already muscular GT3 RSR it replaces.

The new 911 GT3 RSR can be raced at the Le Mans 24 Hours, the FIA World Endurance Championship, the Le Mans Series, the American Le Mans Series as well as the International GT Open and in other series and races.

Hartmut Kristen, Head of Porsche Motorsport commented: 'Our customer teams can expect a technically mature, high performance race car with which they will be highly competitive at international long distance races'.