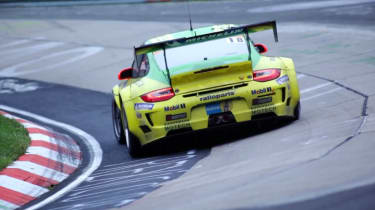 Porsche is celebrating 50 years of the 911 this year, and the introduction of the new RSR race car is one more reason to celebrate the firm’s rich motorsport history. This new video clearly reflects to the latter, showing some great classic footage of competition 911s around the world. It’s one of the first celebratory events Porsche has prepared this year, with the main one scheduled during the 2013 Goodwood Festival of Speed.

We’ve already reported on the details of the 2013 Le Mans contender, which had its race debut in the 6 hours of Silverstone last weekend. The team finished 4th and 6th in the GTE Pro Class with Marc Lieb, Richard Lietz, Romain Dumas driving the first car and Jörg Bergmeister, Patrick Pilet, Timo Bernhard on the second one.

The 2013 991 RSR features a 4.0-litre flat-six producing 454bhp, channeled through the rear wheels via a six-speed sequential gearbox. Its wheelbase is 100 mm longer from its predecessor, making the car more predictable on the limit.