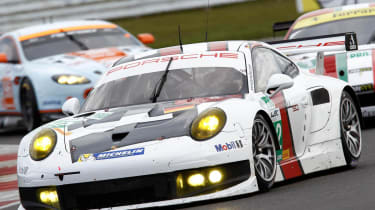 Porsche’s Le Mans-challenging 911 RSR has got off to a good start. It finished fourth in class in the opening round of the World Endurance Championship, the six hours of Silverstone. Porsche works drivers Marc Lieb, Richard Lietz and Romain Dumas – the latter a former Le Mans 24-hour winner – just missed out on the GTE-Pro class podium in the new RSR, which is based on the 991-generation of Porsche 911. A second car – with Joerg Bergmeister, Patrick Pilet and Timo Bernhard (another Le Mans victor) at its wheel – finished in sixth. Overall race victory was taken by – surprise surprise – the Audi R18 e-tron quattro – with GTE-Pro class honours going to an Aston Martin V8 Vantage with Darren Turner and former Formula 1 driver (and nephew of Ayrton) Bruno Senna in its driving team. Hartmut Kristen, Head of Porsche Motorsport, said – ‘both new 911 RSR cars reached the flag on their race debut, and there were no major technical problems. With a new team, of course, there is still some fine-tuning to be done, that’s normal. We are looking forward to the next race and hope that the car will make another step forward there.’ The RSR will compete in the 2013 World Endurance Championship and marks Porsche’s return to the round-the-clock race at Le Mans as a works team. Competing against Vipers, Corvettes and Ferrari 458s in the GTE-Pro class, it’s an intriguing preview of the company’s full Le Mans return – fighting for overall victory with an LMP1 prototype from 2014 – with Red Bull F1 driver Mark Webber rumoured as one of its drivers. Watch this space for more info.