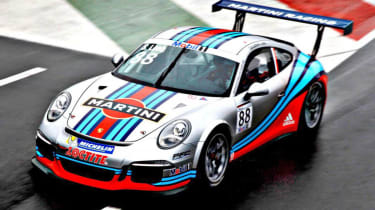 The Martini striped Porsche is back. This year marks not only the 911’s 50th birthday, but Martini’s 150th anniversary, and to celebrate the new 991 GT3 cup car will wear one of the most iconic race liveries this coming weekend. The first weekend of the Formula 1-supporting 2013 Porsche Mobil 1 Supercup takes place at Catalunya, Spain and at the Martini car’s wheel will be Sebastien Loeb. The nine-time World Rally champion is getting his bum in a lot of racing seats this year, including WRC appearances, an attempt at the Pikes Peak record in a Peugeot 208 T16 and races in an FIA GT McLaren. He will also race the 911 at Monaco on May 26. ‘The Porsche Mobil 1 Supercup is a great challenge for me’, said Loeb. ‘We all sit in identical cars and the race is very tough due to the incredibly close competition. It’ll be very hard for me to stand up to these quick and experienced Supercup pilots, but I love such challenges’. He’s not a stranger to Porsches, fielding a Sebastien Loeb Racing team 911 in the French Carrera Cup and winning races when he took the wheel himself around Pau. It’s all perfect preparation for his predicted full-time switch to circuit racing in 2014.