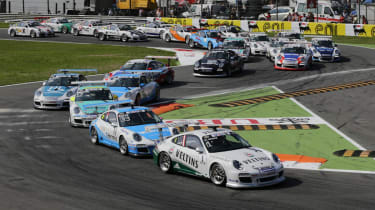 Nine-time world rally champion Sebastien Loeb will compete on the undercard at the next two rounds of the 2013 Formula 1 season in the Porsche Supercup. The 39-year-old Frenchman is continuing his moves towards circuit racing and a possible World Touring Cars programme with Citroen, and will only compete on two more WRC events – Rally Argentina next week and Rally France in October – before he retires from rallying for good. He will jump into a Porsche 911 GT3 Cup to contest the opening rounds of the one-make Supercup series at Catalunya (May 12) and Monaco (May 26). 'I want to drive as much as possible on circuits and learn as much as I can,' said Loeb. 'Besides the driving, these are fun events since they take place alongside F1 weekends. There will be the pleasure of racing, but also the pleasure of experiencing the two Grands Prix, including Monaco, which is always special.' The Supercup races add to what is already a busy schedule for Loeb. As well as the two outings and Rally Argentina, his FIA GT Series campaign in a Sebastien Loeb Racing MP4-12C is continuing, taking 13th place alongside Alvaro Parente in last Sunday’s race at Zolder in Belgium. As if that wasn’t enough, Loeb is also driving a Peugeot 208 T16 on the Pikes Peak International Hill Climb in Colorado on June 30.