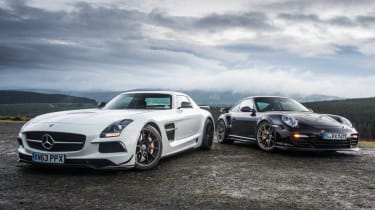 They are two of the wildest supercars of recent years. And both also stood proud on the podium in their respective evo Car of the Year contests. The Porsche 911 GT2 RS – third-placed in 2010 – is no longer on sale, carved from the old 997-gen 911, but it was the generation at its most hardcore, a 611bhp twin-turbo flat-six engine driving only the rear wheels via a good old-fashioned (and incredibly good) manual gearbox.

Its competition around the twists and turns of Blyton Park is eCoty 2013’s third-placed car – and one which a few of us had marked as top dog – the Mercedes SLS AMG Black Series. The SLS Black looks utterly wild, and like the mad, oversteery hot rod that AMG’s strongest cars are known for, yet it’s far more sophisticated than that. Here is the sharp, reactive car the regular SLS never quite managed to be. It’s brilliant. And with more power than the GT2 (622bhp) and a swift paddleshift gearbox, it has a good chance of victory.

So which is faster? Which is scarier? And how big was the tyre bill after Jethro Bovingdon had finished with them? Answers to some of those questions in the video below…