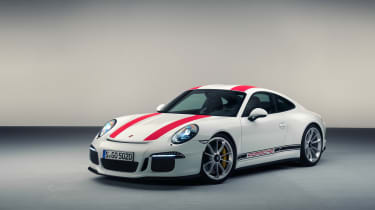 Rumours have abounded or months but now we know for sure – the new Porsche 911 R has the 4-litre naturally aspirated flat-six from the GT3 RS, but none of the RS’s extreme aero and it has the smaller wheels and tyres from the GT3. It has a new six-speed manual gearbox, weighs 50kg less than an RS and Porsche will build just 991 at a basic price of £134,000 each. In short, it sounds tailored to the thrill of driving.

The outputs of the mighty engine are exactly the same as in the RS, which means 493bhp at 8250rpm and 339lb ft at 6250rpm. However, as the loses through the manual transmission are slightly less than the PDK, the amount of power reaching the rear wheels is slightly greater than in the RS. The 0-62mph time is being quoted as 3.8seconds and with far less drag the top speed is claimed to be a monstrous 201mph although even that is said to be a conservative figure.

Although the six-speed manual gearbox uses the same casing as the rest of the 991 generation of 911s, the internals have been completely reworked. The result is said to be a beautifully short, precise rifle-bolt action that is somewhat lighter than the rather hefty shift that people will remember from the 997 GT3s. The manual gearbox is a big contributing factor in the dry weight of just 1250kg (it’s 1370kg wet with a full tank), as it saves 20kg over the seven-speed PDK. Other weight has been saved with the use of carbon fibre for the front wings and the front and rear bumpers, while PCCB (carbon ceramic) brakes come as standard. An additional 4kg of sound insulation has also been stripped from the interior compared to the GT3 RS, which should make the 911 R a very visceral place to spend time. 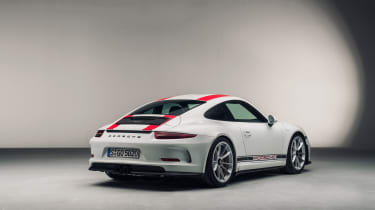 Although there is no fixed rear wing or front arch vents, the engineers have spent considerable time ensuring that the 911 R remains stable at high speed. For a start, the automatically deploying rear wing rises slightly higher than on a normal Carrera. However, the main focus was on the airflow under the car and if you get down on your hands and knees at the rear of the car you can see that there are long vanes forming a diffuser. Whilst you’re down there you might also notice the titanium exhaust.

Some people will perhaps find the retention of the rear-wheel steering mechanism anathema to the pure driving philosophy. Originally Andreas Preuninger (head of Porsche’s GT division) had intended to get rid of it but when he tried a car without the rear-wheel steering he realised that the huge sacrifice in terms of agility was too much and certainly wasn’t worth the small weight saving. Some people had expected a smaller, less grippy tyre and wheel combination too but, as Preuninger explains, he still wanted the car to be fast and agile so Cup 2 tyres were the right choice. And given that the greater power of the RS’s motor is going through the smaller 305 section contact patch of the GT3 tyres (compared to the 325 rears on the RS’s bigger 21inch wheels) he says it is more than capable of drifting very nicely… 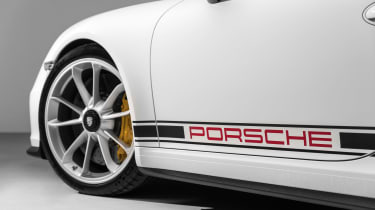 One thing that Preuninger is very keen all owners specify is the optional lightweight single-mass flywheel. He says that it gives a nice extra layer of aural character to the car as well as really improving the eagerness of the engine. As an aside, it is also worth noting that this whole car was developed in a faintly incredible 13months.

As you would expect, there are a few stylistic nods to the original 1967 911 R. On the outside the colour choices are silver or white, but you can add green or red stripes, recalling the famous BP liveries of old. The wheels can also be specced in a new matt silver colour that is intended to mimic the bare aluminium surfaces found on the original. Inside, the modern R looks subtly stripped-back. As you would expect there are no back seats, the door releases are fabric and the R does without air conditioning and a radio (unless requested). The base spec also does away with leather apart from on the 360mm steering wheel and stubby gear lever. There is the option to have the gorgeous 918-style seats in a rather lovely brown leather with retro Pepita Tartan (hound’s-tooth) fabric in the centre sections. 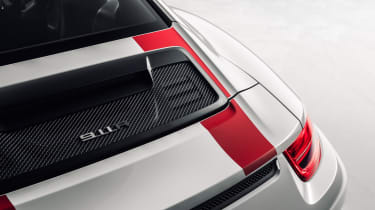 As you can imagine, we can’t wait to drive the new 911 R and give you a full review. For now though, the look and spec alone are enough to get us salivating. The lack of a fixed wing means that most people on the street probably wouldn’t give an R a second glance, assuming it was just another 911 Carrera. But any of you reading this would instantly clock the subtly wider hips and wonderfully muscular stance of the R and recognise it for what it is. The visual effect is similar to the 996 Carrera 4S. It also reminded me of when an actor shaves his head and bulks up for the role of a muscular baddie in a film. Basically it looks fantastic and the promise of a distilled, pared-back, pure driving experience is something to get very excited about indeed. Perhaps the most telling thing that Preuninger said was that he thinks the R will tempt people who have been buying classic 911s for their feel and character back to a modern car.