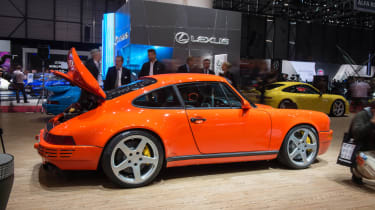 Among the less tasteful purveyors of customised performance cars at Geneva, RUF’s clean, simple stand is a haven of good taste.

This year is no different, with the company presenting four distinct models, each offering a different take on the reimagined Porsche 911 theme.

It starts with the new SCR 4.2. As the name suggests, the SCR packs a 4185cc flat-six behind its rear axle, sending 518bhp and 369lb ft to the rear wheels via a six-speed manual gearbox.

That, conveniently, is enough for a top speed of 200mph on the dot, which if nothing else cements the company’s reputation for extracting ludicrous outputs from some of Stuttgart’s best sports cars.

It’s light too, tipping the scales at 1190kg, courtesy of the tiny 964-derived bodyshell. Despite its beginnings, RUF has also managed to extend the car’s wheelbase by 70mm, for better weight distribution and balance. A five-spoke alloy wheel fills each arch and, on proportions alone, you’d not know such stretching had taken place. 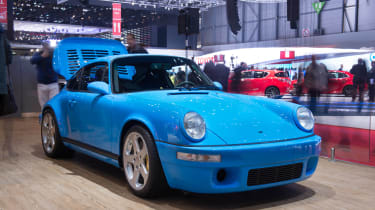 Still, it’s not the ultimate 964-bodied RUF – that would fall to the RUF Ultimate (see what they did there?), which produces an even greater 582bhp from its 3.6-litre six, thanks to the efforts of turbocharging.

Putting 531lb ft through its rear wheels, it’ll top 210mph, and once again weight has been kept to a minimum: 1215kg, thanks largely to a carbonfibre body.

Next up is the RUF Turbo R Limited – the grey car in our photographs. Now we’re into serious supercar territory with a 993 body, 612bhp at 6800rpm and – if you suspect such things might prove troublesome with traction – the option of all-wheel drive. Top speed? 211mph.

Fastest of all is the RUF RtR narrow, based on the latest 991 chassis. Despite the name, its handbuilt body is wider than that of a standard 991, ensuring its blistered arches can contain the 255-section front tyres and the 325-section rubber at the rear.

Click on the gallery above to see each of the new RUF models – and head to our Geneva show hub page to discover more performance vehicles from the show.