Porsche has been spotted testing an unusual 911 prototype on the Nürburgring in recent weeks, one featuring a collection of unlikely modifications that takes this possible 911 variant in a rather different direction to the GT3 and Turbo S.

Building upon what looks to be a standard 992-generation bodyshell, this prototype features a set of rudimentary extended wheelarches concealing what is a quite substantial amount of additional ride height compared to the standard Carrera. These arches, rather than having a true technical purpose, are instead fitted to hide the extra space within the wheelarch, making it look relatively unchanged from the standard model at first glance. 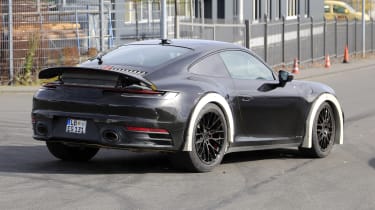 This extra ride height is a substantial change too, as the 911’s coilover suspension design doesn’t facilitate adjustable ride heights aside from the hydraulic nose-lift, which is speed limited as it essentially removes all rebound from the damper’s vertical movement.

Other than the unfamiliar ride height, this prototype looks fairly standard, wearing slightly smaller wheels than most, wrapped in tyres with a taller sidewall than you’ll find on the current 911 Carrera. There’s also a small winged outcrop at the top of the rear screen that looks to have a small camera mounted within, perhaps signalling a future use of a virtual rear-view mirror, like the one already found in some Jaguars and Land Rovers. 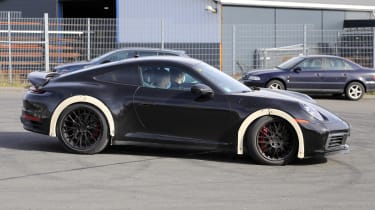 While we have no official steer from Porsche as to the prototype’s purpose, the notion of a toughened-up Safari derivative is not without historical precedent: international rallying played a big part in the 911’s early motorsport heritage, the model tackling rally raids and safari rallies since the 1970s.

It’s no secret that evo is sceptical about most crossovers, but a factory-developed 911 Safari is something – you won’t be surprised to hear – we could well get behind. While there is a chance this prototype could in fact be testing internal components not relative to an off-roader version at all, Porsche was very clear about the expected expansion of derivative and specialised models with the 992, so this could well be something more.