New Porsche 911 Speedster spied – a celebration of the current 911

A celebration of the current 911 and Porsche's 70th anniversary, the new Speedster will round out the 991 in style 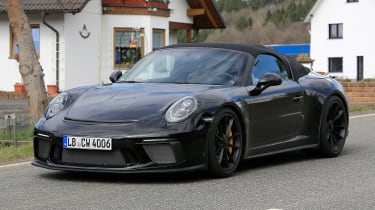 Porsche has been spotted testing what looks to be a new Speedster model based on the current 991-generation 911. A limited edition Speedster has appeared three times before, acting both times as a celebration of the end of that generation of 911. The timing is about right for a new Speedster, then, as the 991 draws closer to being replaced by an all-new model.

The prototype spotted features all the tell-tale signs of a Speedster model, including a lowered windscreen, bespoke fabric roof and long rear deck. Previous-generation Speedsters have been based on Carrera models and featured retro-inspired details, but the car in these images looks to don elements from an altogether more interesting source: the GT3.

Despite Porsche’s usual adherence to tradition, this prototype’s clear adoption of the current GT3’s front, rear and side bodywork, as well as wheels, brakes and tyres point toward an idea this car might indeed have more to do with Porsche’s GT road-car department than first meets the eye. The centrally-mounted exhaust outlets also point toward a likely inclusion of the GT3’s naturally aspirated flat-six engine, although this is an educated guess at this stage. 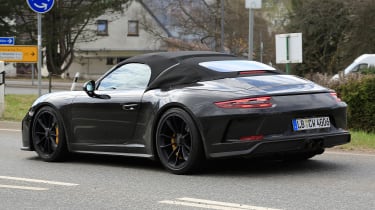 Further alluding to a more ‘hardcore’ Speedster is the creased bonnet, something that is only used on RS GT products, making us question what form this final 991-series Porsche 911 might take.

The eagle-eyed amongst you might have also noticed that the black panel in front of the rear wheel arches is still present from previous Speedster models, so don’t expect a complete removal of the retro elements.

Whatever form this next-generation Speedster takes, it does appear to be picking only the best items from Porsche’s pantry of ingredients to cook up what might be the ultimate drop-top 911.