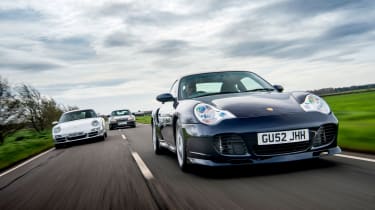 While the 996 was launched as just one model with the rear-wheel-drive Carrera, it wasn’t long before additional variants arrived. Buyers soon had the choice of the Carrera 4 drivetrain, which from the outside looked all but identical, and then Cabriolet and later Targa variants, the latter continuing the sliding glass roof idea first seen on the 993. The later C4S 996 (there never was a 996 C2S) used the wider body of the Turbo, and this was carried over with the ‘4’ 997s which used the wider body in both regular and S guises. All the cars were available with either a six-speed manual or five-speed Tiptronic torque converter auto ’box, with the latter replaced by the first-gen PDK ’box on the 997.2 in 2008.

Both the 996 and 997 were made in the era when silver was a hugely popular exterior colour, and you’ll find most of the cars for sale so painted. If they’re not silver, then they’re usually black, or grey, or occasionally blue. Nevertheless, in the 996 era there was still some ’90s Germanic flamboyance going on with the colour palette, so Pastel Yellow and Ocean Jade can occasionally be found, amongst numerous other shades.

One infamous aspect of the 996, particularly when the cars were unfashionable, was its interior. While available in the usual (very) all-black finish, you could also order Graphite Grey, Space Grey, Metropole Blue, Savanna, Nephrite Green and Boxster Red, with Cinnamon Brown, Dark Grey and Natural Brown appearing on later cars. Being Porsche, the approach was not to incorporate flashes of colour on specific trim elements, but to drop a tin of paint into the interior and give it a very good shake. The resultant effect, punctuated by the stark contrast of black plastic switchgear, is an eyeful, to say the least. Much the same approach was carried over to the 997, albeit perhaps with a little more success (but much more rare).

On the mechanical side, the switchable sports exhaust is always popular and has a particularly sweet tone compared to many aftermarket systems. The sports suspension option on both models was a fixed-rate, lower set-up, so don’t expect the same level of comfort as a modern 911, although they are fun to drive. A limited-slip differential was a desirable option, as well, as were xenon headlamps later on (the standard lamps are weak), while the factory powerkits are very rare on the Carreras (X51) but more common on the Turbo (X50). The debate will rage on about which wheels look best, but at least with the 996 Turbo there was just the one hollow spoke wheel available. 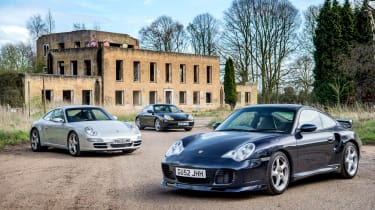 One well-known area of concern for any water-cooled Porsche of this era is damage to the radiators in the car’s nose. Typically, leaves and general road detritus enters via the intakes and gets lodged against the rads, where if left to rot will then corrode the radiators. Expensive.

Damage to the engine’s bores, whether by scoring or them turning ovoid and even cracking, is one of the 996/997’s weaknesses. Lots of theories abound as to why this should happen, but it’s wise to get any potential purchase inspected with a borescope before you buy. Undesirable noises from the engine at idle can be an indicator, too, although most flat-sixes are a bit noisy with age.

The Intermediate Shaft Bearing was a constant thorn in Porsche’s side during the lifetime of the 996 and Gen 1 997, only disappearing when the all-new MA1 DFi engine was released in 2008. Porsche changed the design repeatedly throughout production, and today you have the choice of replacing like-for-like, or fitting an upgraded unit, with ceramic and independently oil-fed versions available.

With its complex multi-link rear suspension and beautifully resolved ride and handling, the 996/997 has much to lose by wear in this department. While springs and dampers aren’t especially expensive, the lower suspension arms have an integral bush and replacing all four is £1000 in parts alone. For a complete rebuild reckon on £5000.