The last GT3 was as good as a Porsche gets, so can the new one really be any better? 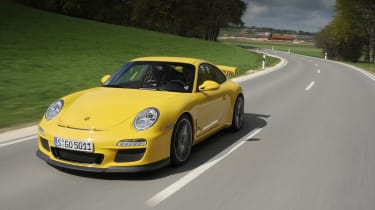 The ‘So what’s your favourite car, then?’ question is tricky. I get asked it a lot. It’s a staple query from random, well-meaning people at christenings and engagement parties, most of whom like watching Clarkson & Co on Sunday evenings. I used to launch into a small speech about why it’s simply impossible to pick a favourite and how you need a big barn with at least ten parking spaces so that there’s room for a car for every situation. Five minutes later, just as I’d be explaining why an F40 is not really a choice but a necessity, I’d realise that their eyes had glazed over – they didn’t like cars that much and this wasn’t the quick, satisfactory answer they wanted.

Then I drove a GT3. I still maintain the ten-car principle, but now I always say that if I won the lottery I would walk straight out the next day and buy a 911 GT3 (although this brings its own eye-glazing problems because if people don’t really care about cars then talking in numbers and letters is about as comprehensible as talking Klingon). Anyhow, the point of all this is that the chance to drive the new GT3 is both exciting and nerve-wracking. It’s unlikely that Porsche will have over-egged the pudding and produced a bad car. But it’s just about possible – and I really don’t want to go back to the ten-car explanation.

The first time I catch sight of the new rear wing, centre-locking wheels and road-grazing front spoiler is early morning in a village south of Stuttgart. I’d dragged my legs out of bed at first light to go for a run and everyone is still asleep when I return to the hotel and spy the Porsche Motorsport truck outside. There are a couple of GT3s parked up round the back, dew clinging to their curves. Walking around them in the stillness, there’s nothing particularly striking or unexpected. The rear end looks slightly fussier and the wing is perhaps more function and less form than some of the previous GT3 pushbars, but the new wheels look great, particularly with the 30mm drop in ride height compared with a standard Carrera, which tucks them up into the wheelarches beautifully.

A couple of hours later, while we’re waiting for the press conference to begin, a glance down the spec sheet appears to confirm something that had been worrying me since I’d noticed the numbers on the endplates of the rear wings. The engine is now 3.8 litres, not 3.6. But further investigation reveals that there’s no need to worry. It’s not the direct-injection unit from the Carrera S (lovely though that is), but rather it’s still the titanium con-rodded engine that’s appeared in all GT3s to date – and originally in the GT1 – but with the bore increased from 100 to 102.7mm. The engine was actually used in last season’s GT3 RSR racers, and how it can rev to a heavenly 8500rpm and still meet Euro 5 emissions standards is beyond me, but it does. The flat-six now produces 429bhp at 7600rpm (up 20bhp) and 317lb ft of torque at 6250rpm (up 19lb ft), but Porsche claims that the biggest and most noticeable improvement is in mid-range torque. Combined with a weight of 1395kg (the same as the last GT3) the 0-62mph time has dropped to 4.1 seconds.

At the end of the press conference we’re given a warning about the police in the local area. Then, just before we’re allowed out of the door in an orderly stampede, we’re shown a video of Walter Röhrl (who I happen to be sitting behind) driving the new GT3 in a spine-tingling fashion around the Autodromo del Levante. Sorry, you were saying something about police…?

Outside, all the cars have now been revealed and there is one that stands out. Cobalt Blue is the colour. It hasn’t been seen on a 911 since the 993 generation but it looks utterly stunning. Unfortunately the Americans have nabbed it, so we settle for a yellow car with the no-cost-option Clubsport pack (half cage, battery switch and a fire extinguisher, plus a six-point driver’s harness supplied but not fitted).

This car also has the lightweight carbonfibre bucket seats first seen in the Carrera GT. They are a rather extravagant £3063 option but they save a massive 34kg over the standard sports seats and 10kg over the optional sports buckets from the GT2. Elsewhere inside there is the usual grey Alcantara on all the contact points and the familiar five-ring dials. It’s clearly not an interior designed by someone with flamboyant shirt cuffs and it’s arguably a bit dull for an £82K car, but then that’s never been what the GT3 is all about.

One option that’s not fitted to our car is the lift system for the front axle, which temporarily increases ground clearance by 30mm at the press of a button. Unless you live near particularly vicious road-humps or have a vertiginous American-style driveway, then you probably needn’t bother.

We trundle out of Odenwaldstetten and the GT3’s first noticeable trait is the unashamedly heavy controls. Depress and re-engage the clutch and you can feel the muscles in your foot, shin, calf and thigh working against the pedal’s resistance. All GT3s come with a six-speed manual because, thankfully, it was deemed inappropriate to use the 30kg heavier PDK. The shift itself is short, chunky and feels like it will last several thousand years, let alone miles.

It’s a common misconception that the GT3 has a rock-hard ride. It’s firm and ruthlessly well controlled but there is also uncanny damping which takes the edge off manhole covers in towns and kerbs on the Nordschleife alike. There are two stages to the PASM (Porsche Active Suspension Management) accessible via a button on the centre console. However, the firmer Sport setting is really only for super-smooth circuits. The PASM will also finely adjust its control mapping automatically depending on the speed and road surface.

The roads of the Swabian Highlands are probably the best I’ve driven in Germany. They are (obviously) largely smooth but there are some narrower, bumpier sections too and the corners are frequently very well sighted with their little white marker posts. Turn in and there is tremendous grip from the GT3. Turn harder and there’s more grip. Push the chassis and the Pilot Sport Cups through a long third-gear corner and the outside of your face will actually start to feel like it’s trying to detach itself from your cheekbones. You might have initially thought the seats were a little unnecessarily tight around your rib cage, but not now.

You always know how the weight is distributed in the car and you still have that wonderful feeling of traction out of a corner as the engine pushes a little bit harder at the base of your spine than 429bhp ought. However, the most incredible thing about the new GT3 is its stability and precision. The reaction when you turn into a corner is absolutely instant, faithful and solid, allowing you to pick up a clipping point with  complete confidence. It reminds me of the Audi R8 but more hardcore. Under braking too, where a 911’s heavy bum can sometimes start to feel unwieldy as it unweights, the GT3 seems to remain utterly unflustered. Twice during the day I hit the middle pedal very late into an uncomfortably downhill hairpin and still make the apex. It is simply astonishing and leaves you grinning at the sheer absurdity of its limits.

Except in trace form, as the front or rear gently smears through or out of a corner, under- and oversteer simply don’t exist on the road. There are buttons to disable the stability control on its own (presumably for a wet track, where you want help with traction but would like the car to slide) but you’d have to be Walter Röhrl to feel the need to disable it on the road.

Over supper the night before, Carsten Schebsdat, the quietly spoken project engineer for the GT3, talked me through the changes that have been made. First up was a tweak to the front suspension geometry, carried over from the GT2 (and without which the GT3’s big brother was apparently almost undriveable, with lots of snap oversteer…). Then they drastically lowered the centre of roll at the front and raised it at the rear. This was all designed to get the back axle reacting more quickly because, as Schebsdat explained, turn-in alacrity is actually more dependent on the reaction of the rear axle, not, as you might think, the front. This tautening of the rear end is also aided by the new optional (£776) dynamic engine mounts, which help secure the movement of masses at speed. These adjust their viscosity to the style of driving by the use of magnetic fluid and an electric pulse (just like a Ferrari 599’s dampers).

Halfway through the morning’s drive is a brief section of Autobahn where the GT3 hits a composed 189mph in an amazingly short distance before traffic appears. The revised aerodynamics have apparently doubled the downforce over the last generation car.

The road route in the afternoon (obviously we didn’t actually stop for lunch, merely fuel) is arguably even better and the GT3 seems to get more and more impressive in its abilities. And if the thought of all that stability and grip is a bit too clinical for you then there is, of course, the ultimate emotional compulsion for buying a GT3 – the sound it makes. With a new exhaust system its howl is seemingly louder and more glorious than ever, particularly as the engine ramps up at around 4400rpm. If you manage to secure a test-drive then make sure you open the windows.

Because I loved the last GT3 so much I would argue that I came to the 997.2 as potentially its biggest critic, yet I really, honestly couldn’t pick any holes in it. Progress demanded that the new model be quicker, faster and dynamically improved, and it is. And without a shadow of a doubt it is a five-star car. When I sat next to Walter Röhrl in the GT3 later he was still smiling at the car’s abilities. Yet even he admitted that, extraordinary though it is, he enjoys driving his historics because they require more of him. And that’s the only question mark I can throw over the new GT3: is it almost too good? Nah.