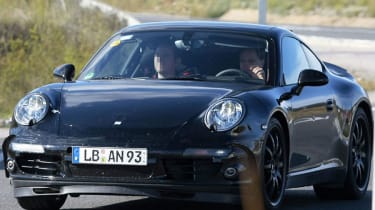 In the same week that Porsche has announced its controversial Panamera saloon and diesel Cayenne SUV, die-hards will be pleased to know it can stick to the basics, too, with this new 911 mule out on the road undergoing chassis developments - note that 'lane changes' warning sticker on the back...

Looks wise, changes are difficult to tell, short of some more upright headlights (although these are likely stuck on to cover up any real design changes) and the side mirrors move from the window frame to the door itself. Exciting stuff. The rear end looks like it has undergone more dramatic changes, judging by the size of the mock spoiler Porsche has felt the need to graft on the back. Those slats hint at the air needed to get to that rear-mounted engine, one thing that is destined to stay the same.

Another thing that will remain is the option of PDK, the double-clutch semi-auto, although it may be in tweaked format. We'd hope so anyway, as we're yet to be convinced by the new technology. Expect to see more of the 998 out and about in black bags before its 2011 reveal. The v2 997 has just recently launched, don't forget, and Porsche is busy enough launching the new Panamera and updated Boxster and Cayman.