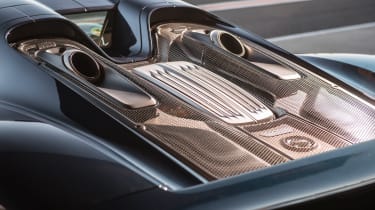 The title of this section doesn’t really do the 918 Spyder justice. Much like in F1, perhaps we should describe its drivetrain as a ‘power unit’ as it’s made up of a 4.6-litre V8 with 599bhp at 8700rpm and 398lb ft at 6700rpm, supplemented by an electric motor for each axle. The internal combustion engine and rear-mounted electric motor drive through a 7-speed dual-clutch PDK transmission with electronically controlled limited-slip differential, while the front electric motor is single speed and decouples at 165mph. The total combined output is 875bhp and 944lb ft. The liquid-cooled 6.8kWh lithium-ion battery sits between the engine and the carbon fibre passenger cell. The 918 Spyder can be plugged in but also charges through regenerative braking with impressive speed. Its electric range is 18-miles and it can be driven in E-Power mode at up to 93mph.

The first thing that strikes you with the 918 Spyder is the ease of use. There is something rather wonderful about being able to leave early in the morning, in a 875bhp car, completely silently. What’s more, there is a useful 20mile range on fully electric (compared to just 6miles in the P1 and nothing in the LaFerrari). But as impressive as the two electric motors – one 95kW on the front axle and another 115kW on the rear axle – are it is still the internal combustion engine that steals the show. If you’ve got the roof off, then the first time the V8 kicks in it scares the life out of you because the top exit exhausts are not that far behind your head. It is, however, an utterly glorious sound to be scared by. Shrill and angry yet piercingly beautiful it makes the car’s list price seem almost reasonable. 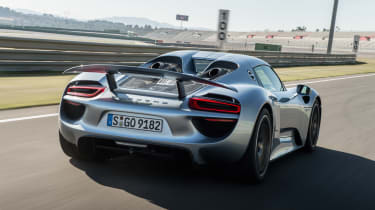 The seven-speed PDK gearbox is also a thing of wonder. The shifts ramp up through the driving modes to the point where they take place so quickly that you almost question whether they happened at all. The paddles’ travel is that of a micro switch, but it suits the incredibly rapid nature of the ratio swapping.

It’s a fascinating drivetrain on paper, then. However, the reality is more impressive still. The 918 has several driving modes, E-Power, Hybrid, Sport, Race Hybrid and Hot Lap, which gives ultimate performance but drains the batteries more quickly. We were concerned before driving the 918 that it would often be left devoid of electric power and hence a good chunk of power short of its full capability unless regularly plugged in. But in several days of driving on road and track the 918 was always operating at full speed – driving through a town in electric mode alone might reduce the range to almost zero but just a few minutes in Sport would see the charge quickly replenish.

It might sound odd to say it of a Porsche supercar… but the 918 is superb when utilising electric power alone. It’s still genuinely quick (0-60mph in 7-seconds) and it feels relaxing to just pootle through little villages in silence. Of course you want to know about the 918 at full fury and it’s quite extraordinary. That V8 is so, so sharp and sounds incredible as it rips up to 9150rpm. It sounds like a pure racer, but the massive low and mid-range hit gives it the feel of a car with twice the cubic capacity. In combination with the fastest, most incisive PDK ‘box you can imagine it makes for relentless and overpowering performance. The numbers might suggest otherwise but the Porsche, for the most part, feels faster than even the P1 thanks to its instant rush of torque.

'The Porsche feels so planted, so calm and so secure, you can exploit its unhinged violence more frequetly and for longer. The steering is much heavier than a McLaren P1's and feels a bit less alert about the straight-ahead. But it has great feel and precision on lock and lets you know exactly what the front end's doing which, in turn, engenders a feeling of absolute confidence the P1 never quite nails.

'It's an ambitious fusion of race-bred powertrain and rearl-world competence wrapped up in a modern-day reinvention of the sublime Carrera GT' - David Vivian, Contributing Editor (evo 200)