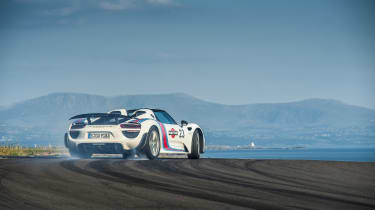 Porsche is famously conservative with its performance claims, so when it lists a 0-62mph time of 2.6sec for the 918 Spyder, it gives you some idea of just how monstrously quick it is. For comparison, McLaren claims 2.8sec for the P1 and Ferrari rather coyly just says under 3.0sec for the LaFerrari. The other acceleration times quoted for a 918 are 7.2sec to 124mph and 19.9sec to 186mph. It will top out at 214mph – a whisker behind the claims for the McLaren and Ferrari.

The reason for the Porsche’s sprinting ability is a combination of its traction thanks to four-wheel drive and a monstrous amount of torque. While the McLaren and Ferrari might boast slightly higher power figures, the 918 completely dominates them with its torque. Although the others put out an identical and not inconsiderable 664lb ft each, the Porsche has a combined output of 944lb ft from its electric and petrol motors. 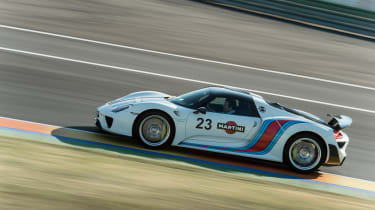 What this means is that on the road the Porsche feels incredibly muscular in its delivery, pinning you to the seat and holding you there with almost seamless shifts. It felt every bit of a match for the P1 when we had them both together in Wales, because although the turbocharged McLaren was mighty once it was into its stride, it almost felt slightly laggy by comparison out of the corners. Everything is relative of course…

Perhaps the LaFerrari feels even more crazily fast and offers similar response thanks to its big normally aspirated V12, but with rear-drive only you tend to be more circumspect with the accelerator. In short the 918’s performance on the road is a match for anything – P1, LaFerrari, Bugatti Veyron SuperSport. On the track it’s supremely fast too and thanks to its inherent traction and balance it’s brilliantly exploitable.

> Find Porsche 918 Spyders for sale on Classic and Performance Car