Still an affordable way into Porsche ownership, but prices are on the rise... 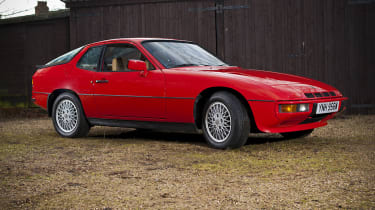 “Pauper’s Porsche” is a term thrown around regularly in conjunction with the 924, but as values rise steadily out of bangernomics territory and even the simplest old Porsches enjoy some of the kudos of their rear-engined counterparts, appreciation for the old front-engined, rear-wheel drive coupes grows by the day.

It’s not surprising the 924 attracted ire from diehard Porsche fans though. Exactly the same fate befell the Boxster and the Cayenne when those models debuted, for many of the same reasons: not a “proper” Porsche, people crowed - but much like the Boxster and Cayenne, the 924 played a large role in turning around the company’s fortunes during one of its lower ebbs.

Today the appeal is simple: the 924 is a compact sports car with attractive styling and a traditional rear-drive layout. It’s relatively practical, mechanically simple and, it has to be said, wears the right badge. While still in the shadow of the cars that followed (the 944 and 968) good 924s are now increasing in value, so if you want an affordable Porsche but don’t fancy a Boxster, now could be the time to buy. 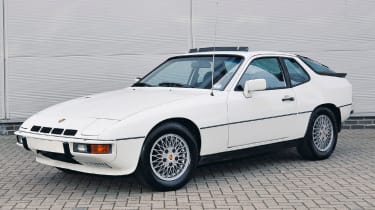 We have the 1973 oil crisis to thank for the Porsche 924 - or at least, for its Porsche badging. A joint project between Volkswagen and Porsche, the car was primarily intended to be a flagship sports coupe for VW, developed by Porsche but powered - to keep costs down - by an existing Volkswagen/Audi engine, albeit modified by Porsche.

The result was a compact 2+2 coupe form over a Porsche four-speed transaxle, rear-wheel drive layout, with the 2-litre VW/Audi four-cylinder up front, but with the oil crisis turning customers off more profligate vehicles, Volkswagen decided instead to develop a coupe based on the front-wheel Golf project instead - the Scirocco.

Still searching for a model to replace the ageing mid-engined 914, Porsche bought the project back from VW and the 924 was born, launching in 1976. While performance was relatively low by Porsche standards the draw of an entry-level Porsche was as strong then as it is today, and it sold well - in its second year, more than 25,000 found homes.

Developments came thick and fast, the four-speed gearbox soon making way for a five-speed unit and an optional three-speed automatic. In 1979, Porsche debuted the 924 Turbo, which used a KKK turbocharger to lift the 2-litre’s output to 168bhp, and distinguished it visually with a slotted nose, NACA duct in the bonnet and unique alloy wheels, while the standard 924’s drum rear brakes made way for discs.

1980 saw perhaps the ultimate 924 debut in the form of the 924 Carrera GT - a wide-bodied, intercooled-turbocharged homologation model aimed at competition use. Race versions saw service at Le Mans (culminating with the 375bhp Carrera GTR), and the model lasted until 1982, when production of the 924 Turbo ceased.

That same year, the 924-based 944 made its first appearance, packing a 2.5-litre four-cylinder engine under its blocky but still clearly 924-derived shape, and it was a detuned version of this 2.5-litre unit that made its way into the subsequent 924S, which made its debut in 1986. 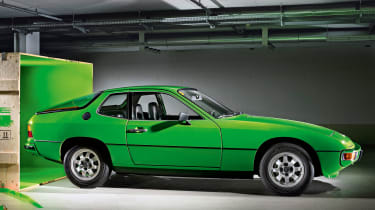 With improvements to the suspension and power and torque outputs more becoming of something bearing the Porsche name, a standard 924S is given away by its distinctive teledial five-hole alloy wheels. Otherwise though it’s visually similar to later 2-litre models, which by this time had already gained the plastic spoiler around the base of the rear screen and chunkier door mirrors, as well as small interior improvements. The 924S lasted until 1989, with the 944 carrying the four-cylinder flag at Porsche until the 968 arrived in 1992.

Today 924s remain affordable, prices ultimately capped by the values of 944s and 968s above them (not to mention the prospect of inexpensive Boxsters, Caymans and 996s) but they're long past their lowest point now - time was when a tidy 924 could have been picked up for £1500.

Fairly simple mechanically, 924s are relatively easy to work on, but they're sensitive to maintenance and some parts can be expensive. Corrosion can still be an issue but the worst cars have probably been scrapped by now - though beware people trying to cash in on rising prices by presenting shonky examples as better than they are. As for model choice, a 924S will feel best suited to modern driving, but the earliest cars with skinny tyres, no rear spoiler and chrome detailing around the windows have real classic charm.

‘The first few yards are dominated by all sorts of noises… the rattling of the rose joints, the deep, coarse note of the engine overlaid with chirps and flutters of the plumbing for the KKK K26 turbocharger, and me, heaving at the weight of the non-assisted steering. It really does feel physical.

‘With speed the steering lightens very nicely and there’s real, authentic feel bubbling back through the wheel. The chassis is pretty soft by today’s standards but such is the low mass of the GTS that the body control feels accurate and effortless... In simple terms, it’s just a lot of fun.’