Porsche has opened a spectacular new museum at its headquarters in Stuttgart, showcasing more than 80 mouthwatering machines from its past. These are just some of the highlights 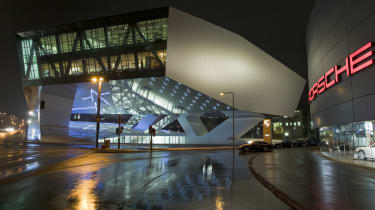 Porsche’s gigantic new museum dominates the heart of the company’s Zuffenhausen plant, shading even the flagship franchise next door. Designed by Roman Delugan, whose mantra is ‘physiological architecture’, the futuristic two-storey edifice opened at the end of January. And you simply have to pay a visit.

Replacing the old 20-car museum, it’s a technical tour-de-force, with the mirror-glass upper storey resting on crazy cubist tripods. Beyond the welcome desk, bistro bar and souvenir shop on the ground floor is the restoration workshop – announced by six suspended Speedsters – which services exhibits so they can be whisked to historic events like the Goodwood Festival.

A domed alloy shell reproducing Professor Porsche’s Type 64 coupé from 1939 tops the escalator to the vast oval display chamber. More icons from the founder’s early repertoire, ranging from an electric-powered wheel from the precocious Lohner-Porsche of 1900 to the magnesium-chassis 1947 Formula 1 Cisitalia Type 360, are mounted on mint-green plinths, setting the scene for Porsche-badged products.

Most of the surfaces are stark white except for the black rim that forms a backdrop to the series production models. Competition cars and oddballs take pride of place in the main theatre. Best of all, none of the cars is roped off, so they can all be viewed ‘in the round’. Given that they all work, there’s surprisingly scant evidence of drip-trays beneath.

The collection focuses on two races where Porsches excelled: Le Mans and the Targa Florio. Among the entries from the French epic are the delightful 1086cc 356 that debuted in 1951, the long-tail 908 that came 2nd in 1969 and the 917 of Herrmann and Attwood that won the following year. Then there’s the Barth/Haywood/Ickx 936, the first turbo to win Le Mans, and the 961, the only four-wheel-drive Porsche ever to compete there. Stars of the Sicilian ‘enduro’ include a 550 Spyder, 718 GTR, 908/3 and Martini 911 RSR. Plenty more race cars are scattered throughout the collection, including F2 and F1 cars from the early ’60s and the ultra-light 909 Bergspyder from the 1967 European Hill Climb Championship.

The museum is also full of surprises. Every so often there’s a small perspex panel in the wall containing an apparently alien object: a set of golf clubs, a Swabian noodle-maker, a child’s catapult. Why? Any sports car worth its salt had to accommodate a golf bag, Dr Porsche introduced works canteens, and David slaying Goliath is symbolic of the small manufacturer trouncing the big boys. In the central arena, Damien Hirst fans have been busy, surgically slicing and encasing a trio of 997s to reveal their innards.

Traditional Porsche values feature in designated enclaves. ‘Lightweight’ is exemplified by the pendant fibreglass shell of a 908 sports prototype, and other clusters flag up ‘Strength’, ‘Horsepower’ and ‘Design’ with appropriate hardware. ‘Aerodynamics’ features a 956 Group C racer fixed to the ceiling on the basis that, at 200mph, downforce from its ground-effect venturi would allow it to run upside down.

The 82 cars on show are but the tip of the iceberg: museum director Achim Stejskal tells me that there are over 400 more in storage. Since all the obvious candidates seem to be on show already, it will be intriguing to see what else they can pull out of this fabulous bag…

How to get there• To drive there from Autobahn A81 (Heilbronn-Stuttgart), take the exit signed ‘Zuffenhausen’ and follow the B10 towards Stuttgart. Take the first exit towards Zuffenhausen, then after about 1km (0.6 miles), directly after the railway bridge, get in the left-hand lane. Follow the signs for ‘Porsche Museum’ and ‘Werk II’. The museum is on Porscheplatz 1, beside a roundabout flanked by factory buildings and a car dealership. You won’t miss it. There’s parking underneath for 260 cars.

The closest airport is Stuttgart, and there are good public transport links, with a railway station behind the museum.

The museum is open from 9am to 6pm Tuesday to Sunday.  Admission is 8 euros with concessions for children, and there’s a café, bistro and gourmet restaurant on site.