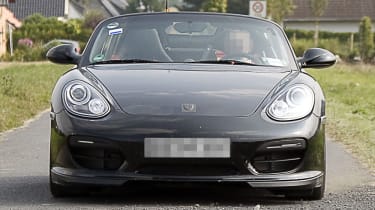 A Speedster version of the Porsche Boxster has been spied out testing. It revives a timeless Stuttgart name and body style, and furthers the retro nods displayed on the 911 Sport Classic at this month’s Frankfurt motor show.

At first glance it appears to be a regular Boxster adorned with various bits of misleading body addenda, but a closer look reveals a reshaped rear end to accommodate the double-bubble look of previous Porsche Speedsters, while there’s also rollover protection present to account for the lack of proper roof on this car.

Rumours suggest the Speedster will use the 299bhp 3.4-litre flat-six engine from the Boxster RS60 (see it against the Merc SLK here) as its power source, but don’t rule out a hike in horsepower, with the 911 Sport Classic gaining 20bhp over its Carrera S base car.

The 1.3-ton RS60 hits 60mph in 5.4sec; expect the Speedster to shed an admirable chunk of weight and move that closer to the five-second mark.

There’s no official word on when the car will be revealed, but with it being spied several months ago, clues point to it being rather close to final production form. Keep an eye on evo.co.uk for the latest on Porsche’s retro sports car.