No matter. Sitting 20mm closer to the ground, the Spyder driver’s ‘office’ is as comfortable, ergonomically sussed and well made as the regular Boxster’s, with superb support from the seats. The driving position is millimetre-perfect, too, not just in relation to the major controls but to the windscreen, which is lower and further away than in, say, a 911 Cabrio, the better to deflect air over the occupants’ heads, while the cluster of overlapping major dials (with that big, central rev-counter) couldn’t be better placed.

With a light clutch and a beautifully precise and well-oiled gearchange, the Spyder is as untaxing to drive as any other Boxster. But the available urge, massaged by the extra 10bhp and the substantial weight loss, feels more charismatically 911-like than ever, the weight reduction amplifying mid-range torque and the baleful engine note at full chat (especially with the Sport button engaged), encouraging a red-line rendezvous at every shift. 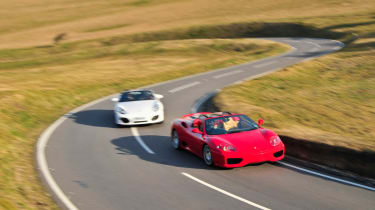 Although lacking the almost organic feel of a 911’s, the Spyder’s steering marries good detail feedback with a well-judged amount of kickback; not a tugging at the rim so much as a gentle modulation, a sympathetic writhing. Shorter, stiffer springs, firmer dampers and new front and rear anti-roll bars, in conjunction with the 20mm drop in ride height, give the chassis a sharper, more alert response to steering inputs and a more hunkered-down stance on the road.

The reduction in the mass of the roof means that the Spyder’s centre of gravity is actually 25mm lower than in the Boxster S. Body motions are brilliantly controlled, traction is almost scarily good and it’s a combination that inspires immense confidence within a few miles of getting behind the wheel.

By the time I reach Beachy Head and Henry Catchpole with the Ferrari, the Boxster Spyder has put in a captivating performance – effortlessly rapid, stunningly secure and, yeah, touched by a definite GT3 vibe. But, straight away, it’s obvious there are areas in which the car from Maranello flattens the Zuffenhausen upstart – not just in terms of extra power and a more evocative soundtrack, but harder to define stuff, too. The Ferrari has an aura. In isolation, the Boxster Spyder (a familiar shape with interesting distortions) probably turns as many heads. When inhabiting the same space-time as the Ferrari, though, the charisma shortfall is painfully obvious. 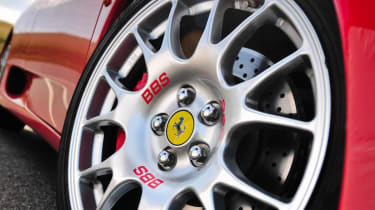 It isn’t even as if the 360 Spider is seriously wrong-footed by the Boxster as a practical proposition. All right, eyes closed, it gives every impression of being a road-going race car. Even at idle, this car’s tweaked exhaust note is loud enough to wake the dead; at full chat it might melt the circuits of the decibel meters used at most noise-sensitive tracks. Its two-seater cabin is lean and functional, with drilled pedals and passenger foot-brace and uncompromisingly firm bucket seats. And although there is a boot in the nose, it isn’t a notably big one.

But you’d fire it up for a trip to the newsagent without giving it a second thought. Interior stowage is generous (especially the wide door pockets), visibility get-away-with-it good, the ride far from fatiguing and the gated gearchange smoother and friendlier than you might imagine. Go easy with the loud pedal and the 360 can do user-friendly supercar. Which counts as a result for a car that, when it was launched in 2000, was regarded as the hardest, most intoxicating Ferrari since the F40.

It isn’t hard to see why. The 360 Spider’s normally aspirated 400bhp quad-cam V8 is intense: loud, manic, shattering in full cry. It has a brace of extra cylinders and 84 more horses than the Boxster’s flat-six. But the Ferrari weighs 175kg more, too, giving it a power/weight ratio of 280bhp/ton against the Porsche’s 252bhp/ton. Not quite enough for a would-be Ferrari killer to get the job done against the clock. Porsche claims 0-62mph in 5.1sec, 0-100mph in 10.9 and 166mph flat out. The 360 is about half a second ahead at 62mph and about half a second at the ton, though after that it gradually pulls away to its 180mph vmax.