At last! Official pictures of the 2012 Porsche Boxster, the third iteration of the sub-911 sports car 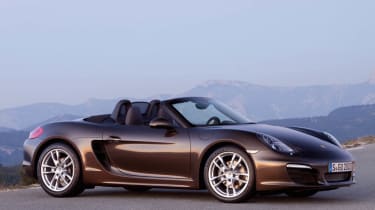 Porsche has pulled the wraps off its all-new Boxster. Now in its third generation, the model has enjoyed its most significant design development too, with shorter front and rear overhangs, bigger wheels and more sculpted side styling injecting some drama into the looks. It’s still recognisably Porsche’s baby roadster, just a leaner, fitter version. Unsurprisingly, the rest of the headlines fall to increased efficiency and better performance. It’s considerably lighter, for starters (though Porsche is yet to announce how much has been shaved from the current, 1.3-ton car), and there’s a pair of new flat-six engines, both equipped with direct injection and stop/start technology. The entry-level Boxster gets a 2.7-litre unit, smaller than the 2.9 it replaces but boasting 10bhp more, at 261bhp, and a quicker 5.7sec 0-62mph sprint.

The Boxster S gets a 3.4-litre engine – the same size as before – but with a 5bhp-healthier 311bhp power output and a 5.0sec sprint to 62mph. Both engines drive the rear wheels via a six-speed manual gearbox as standard, with Porsche’s seven-speed PDK twin-clutch gearbox an option. Thus equipped, both Boxsters top 35mpg on the combined cycle. Those larger alloys – along with a longer wheelbase and wider track widths, of which there aren’t yet any figures – are said to ‘significantly enhance’ the car’s dynamics, while electro-mechanical power steering makes its first appearance in the Boxster. Fear not, though, as if the new 991-generation 911 is anything to go by, it’s one of the best electrical racks out there. It’s also a major helping hand in achieving an overall 15 per cent improvement in fuel efficiency. The Boxster will cost from £37,589, with 18in alloys, stop/start, an Alcantara-clad interior and remote roof operation among the standard kit. The £45,384 Boxster S adds 19in wheels, a part-leather interior and Bi-xenon headlights as well as its pokier powerplant. The Sport Chrono Package, which now includes ‘Dynamic Transmission Mounts’, lies on the options list alongside Porsche Torque Vectoring and its mechanical limited-slip diff. Mk3 Porsche Boxster sales begin in the UK on April 28, and we can expect to see the car given its world debut at the 2012 Geneva motor show a month earlier, when firmer technical details should be revealed.