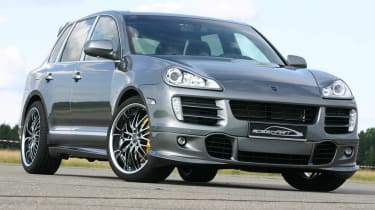 A specialist Porsche tuner has had a go at cranking up the Cayenne Diesel’s glamour and performance.

Speedart, a German outfit, offers tweaks for all manner of Porsches dating back to the 993, but the oil-burning off-roader is one of its less traditional tuning subjects.

Nevertheless, it’s had a good go with the Titan DTR. The stock Cayenne’s 3-litre V6 engine’s 236bhp can be boosted up to 276, 286 or 306bhp, the smaller two upgrades getting a retuned ECU, while the biggest uses a larger turbo to top 300bhp.

The company’s added a new sports exhaust system (presumably to rule out any chance of people thinking you’re in a diesel) while there’s the option of fully adjustable air suspension and some highly tasteful 22in alloys.

Most noticeable though, is the bodykit. It’s not subtle, with front and rear bumpers and side skirts gaining extra muscle and an influx of new air vents and lights (obligatory daytime-running lights present and correct). Inside there’s an abundance of Alcantara and yellow stitching while there’s a new steering wheel and funkier dials.

The power upgrades kick off at 1990 euros (about £1700), with no details on how much the cosmetic and interior changes will set you back. Head to Speedart’s website if the Titan’s got you intrigued…