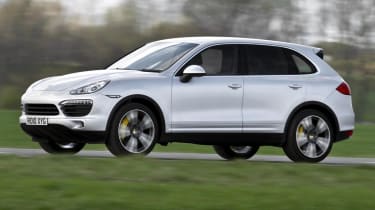 Porsche has confirmed that production of its new baby SUV will go ahead at its Leipzig plant. Called ‘Cajun’, the new model will go head to head with the BMW X3 and Audi’s Q5. Porsche is in the process of enlarging the Leipzig factory, which currently produces both the Cayenne and Panamera models, to manufacture the Cajun, which is due for release in early 2013. Engines for the new model are yet to be confirmed, but there is widespread speculation that they will include a turbocharged 3-litre V6 with around 300bhp, which would give a 0-60mph time of around 6.5 seconds.  Expect the four-cylinder variants to be the big sellers, however, with Audi-sourced diesels and a hybrid powertrain also likely to make an appearance. A six-speed manual gearbox will be offered as standard, with the seven-speed PDK twin-clutch auto available as an option. Porsche’s ‘Sports Chrono’ package will also be an option, bringing an increase in power through an uprated exhaust, along with launch control on PDK-equipped cars. Porsche describes the Cajun as ‘efficient and agile’ and is hoping that it will ‘pave the way for new, younger customers to enter the world of Porsche’. Prices for the Cajun are expected to start at around £30,000.