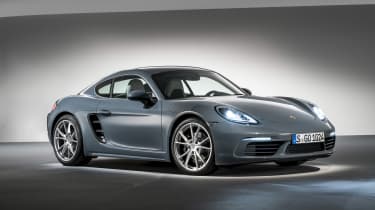 The second model in Porsche’s rebranded 718 range has made its debut at Auto China 2016, in Beijing.

Joining the 718 Boxster, the Porsche 718 Cayman is the latest car in the range to switch six-cylinder power for the brand’s new four-cylinder turbocharged boxer powerplant, and derives its name from Porsche’s 718 sports racing cars from the 1950s and 1960s.

The new four-cylinder engines will no doubt be a source of consternation for fans of the existing six-cylinder units – we described the Boxster’s identical unit as ‘fairly characterless’ in our first drive review – but they’re more powerful and offer greater torque than the old units.

The upshot is extra performance, with both cars breaching territory that was the preserve of supercars in the not too distant past: with PDK and Sport Chrono the 718 Cayman hits 62mph in 4.7sec, while the 718 Cayman S manages the same measure in 4.2sec. Top speeds are 170mph for the Cayman, 177mph for the S.

Those claims should be fairly accurate too, as evo has independently timed the new 718 Boxster S at 4.4 seconds over the 0-60mph sprint, bang on Stuttgart’s claim for that particular car.

The other benefit of the new turbocharged powerplant in each car is better fuel efficiency than the old ‘six, with between 34.9 and 40.9mpg depending on the model.

A revised chassis setup should build on the abilities of the existing Cayman range. Springs and anti-roll bars are firmer than before and the dampers tuned to match; steering is ten per cent more direct and rear wheels half an inch wider, helping put the extra torque to tarmac.

Sport Chrono, Porsche Torque Vectoring (an electronic limited-slip diff) and PASM are once again available, each tailored to the new powerplants. PASM drops the car’s ride height by 10mm and on the S, by 20mm, while an Individual mode in the Sport Chrono package lets drivers fine-tune their ideal combination of driving attributes.

Styling echoes changes made to the 718 Boxster. The nose is sharper in profile, the tail gifted a black strip between the redesigned rear lights and bearing the Porsche script. The front lights are new too, with Bi-Xenon elements and LED daytime running lights; full LED headlights are an option.

There are improvements to the interior too, with a redesigned upper dash panel, 918-style steering wheel and improved Porsche Communication Management infotainment setup.